Huh what a competition day with the boys!!! The volume ramped up to this year's HC Triplet. To see what HC Triplet is really about you can scroll to the right hand side of the blog and check the links to prior Triplets. This was the fifth time we arranged this with Toni. Last two times my bro has been part of it too. Shortly, the idea is to thrown down for 3 grueling events to torture our bodies and minds. This year's "games" were a success as well. First time we did this inside, location was Toni's crossfit affiliate called Crossfit Kehä. Usually we have been outdoors, mainly in Pirkkola sports park. This was also the first year we had barbells included in the game. 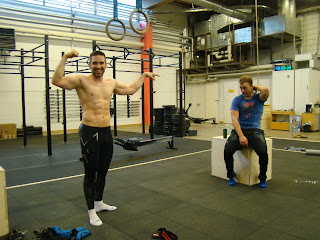 
All of the three events were supposed to be different style and different stimulus. The first one was classic chipper style workout with one guy rowing at the sidelines all the time. Just row your 300 meters and tag next one in line for rowing. We rotated the rower evenly of course for the entire 38 minutes that this bad boy took us to complete. 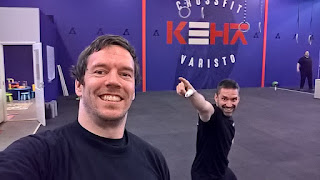 This felt like it took an eternity. It was difficult to know exactly how much it would take time but it was no surprise it took energy, a lot of energy to get to the finish. Our plan was to go by feeling. We didn't divide the work load evenly, just agreed to go for a good bunch of reps, then tag the next one to work on his behalf. 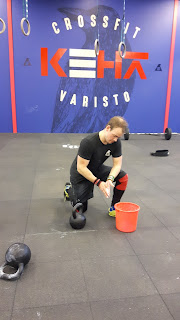 Bar mu's kind of fell on my neck to complete mostly. Those felt pretty good today. I reckoned not to take too big bites as it was the first part of the workout. It was 3-5 reps per set all the way. Burpee box jumps were about 5 reps per dude at a time. That seemed to suit well for everybody. 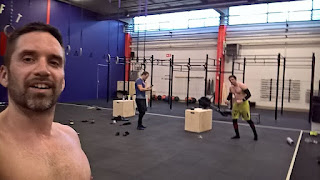 Hspu's felt very good. Those also seemed to be good for Sipa and Toni too. So I only got to do one set for 10 reps and the second one for 5 reps. At this point I thought they would suck more but luckily not. 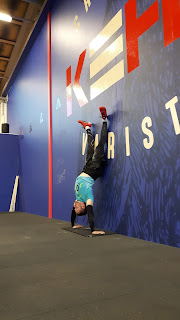 Pull-ups. Those could have potentially destroyed us but there was good mental strength and someone was hanging on the pull-up bar constantly. Toni ripped his hands right on the bar mu's so these were nasty to go after with a bloody blister in hand. Luckily he found a glove in his bag. It was probably not cool to do pull-ups with just fingers. 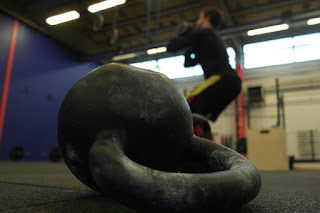 God damn that squat clean @ 80kg! Especially the first reps felt heavy. I was able to rack that barbell perfectly every time. It just felt heavy as hell in the bottom position. There was no doubt of standing it up though. But it really smoked legs and hip flexors with every lift. But those got better through time on everybody's behalf. I believe I got most of these done. Ideally it was planned so that we would do quick singles but it change on the fly and went by feeling. 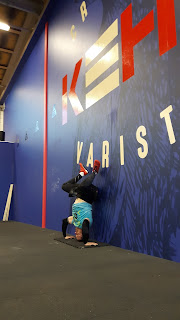 In the beginning thrusters felt like they would definitely be the most disgusting element. Never have I done so light thrusters at 50 kilos! After 80kg barbell that really felt something we smashed rather easily. It was about sets of 5 reps all the way. Finally after 38 minutes it was over. Very good job guys! Great way to start the Triplet, awesome commitment from everybody!


This was nasty. If the first was more of a long, grueling chipper, this was interval work where legs were destined to get murdered in the process. Point was that Sipa started, he completed the 1st round of work, Toni and me rested in the mean while. Once Sipa threw himself over the finish line, I completed the same work load. And after I had done my part, Toni did his. After Toni, Sipa moved on to round 2, and this system continued through all 5 rounds. 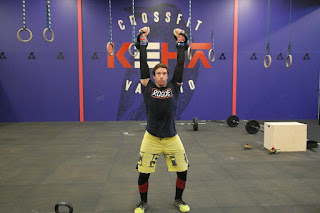 The dark place definitely showed up on the shuttle runs. It was shuttle runs on purpose. That's a million times worse than 100m run itself. It really didn't matter which element of these five alternatives was going on. Okay they first swings were heavier, and front squats got our legs big time as well. 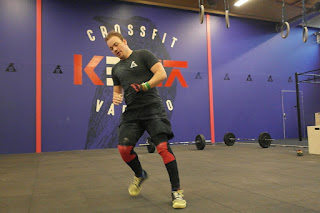 Sipa lost his calf in the process on one of the runs. He started limbing because of the cramp. Luckily we had magnesium spray and he was able to continue nicely. We had different weights for different movements. This time we agreed the loads were right were they needed to be. 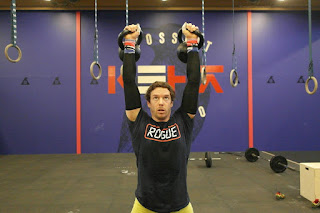 It took us 17 minutes to complete the kettlebells and runs. Part B initiated right after the work had been completed. This frightened us a little prior to the workout. I thought why the heck did I program this heavy barbell right after intervals. 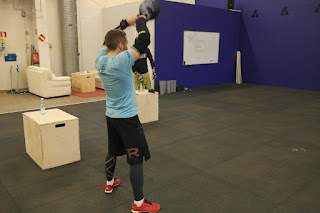 However, we got this! We won the barbell for sure. We kept the same order on this one. Sipa started, I was second, Toni came third. I felt strong already on the first rep. Took it on the front rack, and bounced it overhead with the same movement, not stopping at any point. Was able to keep this pace throughout the 8 minute time window. I felt like my partners also improved towards the end all the time, and it started to look like a feather in their hands towards the end! We got through 24 rounds + 2 reps. That makes it a total of 74 reps. 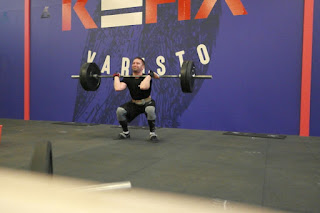 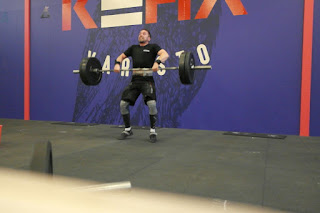 
Grande Finale! We once saw Mikko Salo and Jonne Koski post a workout where they did 30min amrap of rope climbs. That really stuck to my head as we honored their work capacity with my bro. HC Triplet seemed like the perfect place to redeem that promise we made to each other to get after it some day. 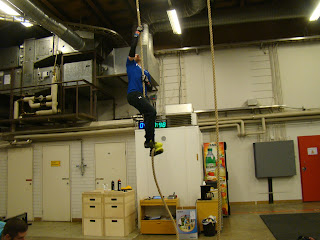 The rope was long. A lot longer than I have used to climb in Klaukkala. Well, I have 7.6m rope but the distance to climb is probably 5 meters long. This was probably 7 meter all the way. At first we climbed to 5m (I went to mark it with a tape in the beginning) but at some point I decided to start going all the way to the roof. I still had something in my tank and strength left, and I didn't want that to be the case once HC Triplet Goes Kehä was finished! 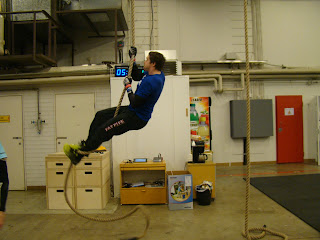 It felt super good to climb. And I was very positively surprised how well my body was able to hold on with just short recoveries between climbs. Toni had some issues with his shoulder and had to withdraw at some stage and it was on me and Sipa to finish the 15 minutes. That made the recovery even shorter. Still, we somehow were able to move up and down the rope nicely. I have no idea of the amount of reps we completed. Sipa had an idea of about 20 reps per dude. 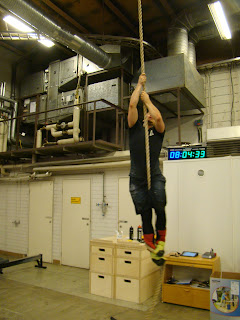 These competitions have always been tough as nails for us. Definitely heavy work both physically and mentally. These are written to be tough, and we succeeded in that goal. As we look at this afterwards I got to say some progress has taken place for Sipa, Toni and I. There's no way we could have done this volume in the last Triplet in 2014. Neither did we have the skills back then required in this comp. So it's very uplifting to stop for a while and think how much progress has been made in the past years. 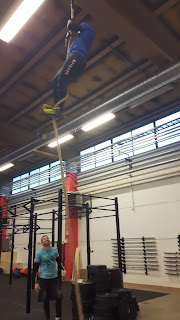 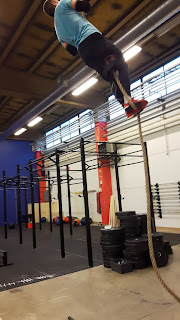