Awesome!!! What a day! On the other hand, can't call it a surprise. These Triplet throw downs are simply the best crossfit time ever. Having a blast with my training partners. Today was the first time ever we had company with Toni in these Triplets. Sipa and Jake tagged along so it was only natural to do these workouts as pair workouts, teaming up with Toni against Sipa and Jake. It was a tight one! 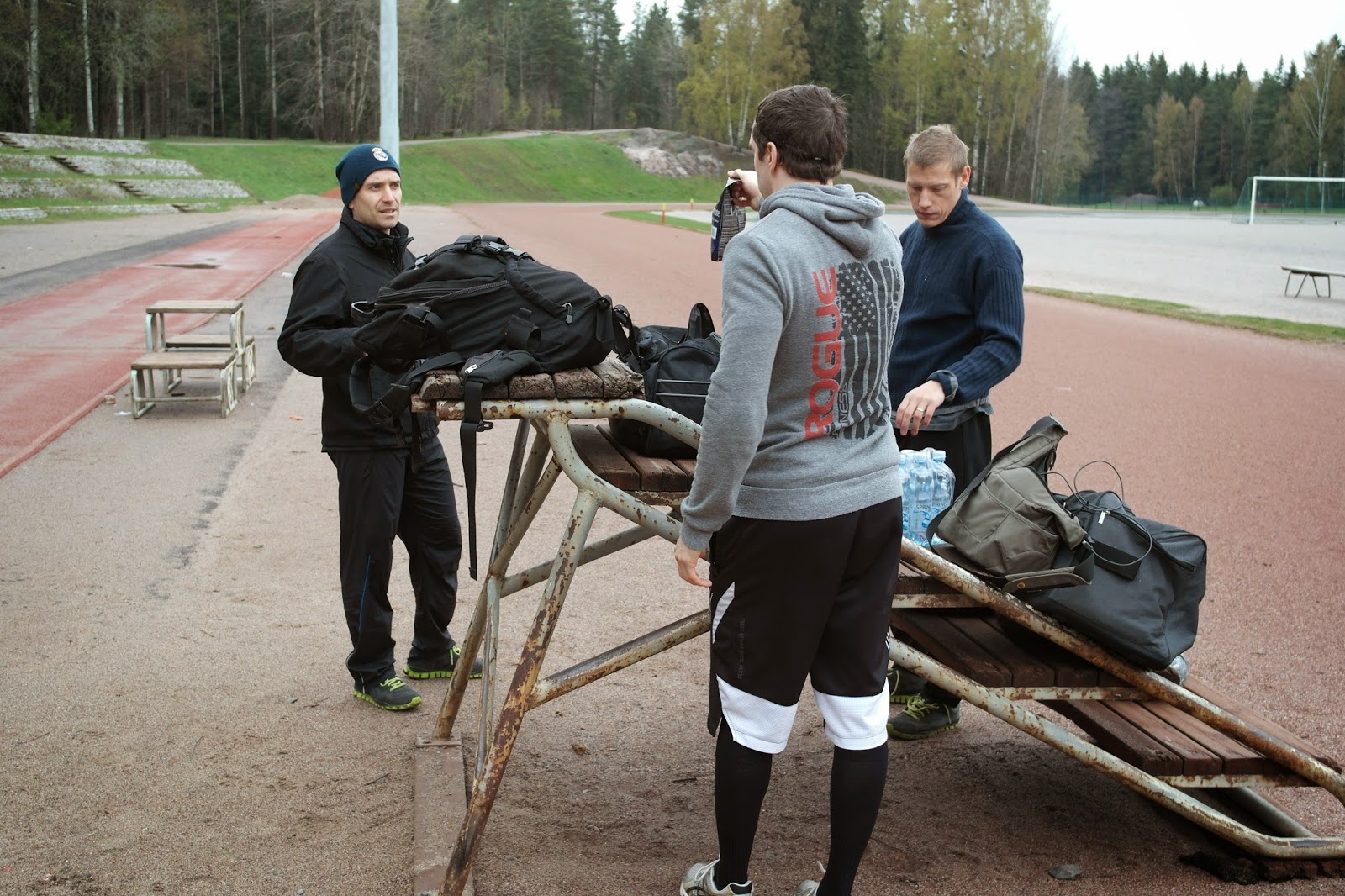 All these workouts were different style of events. The first one was something like a chipper. One athlete was allowed to work at a time except for the run part. Both were required to run at the same time for the entire 400 meters. On all movements one guy was allowed to move body or weights at a time. The reps were ascending from 40 to 100 reps, changing the element after each run. The workout began and ended with 200 double unders. 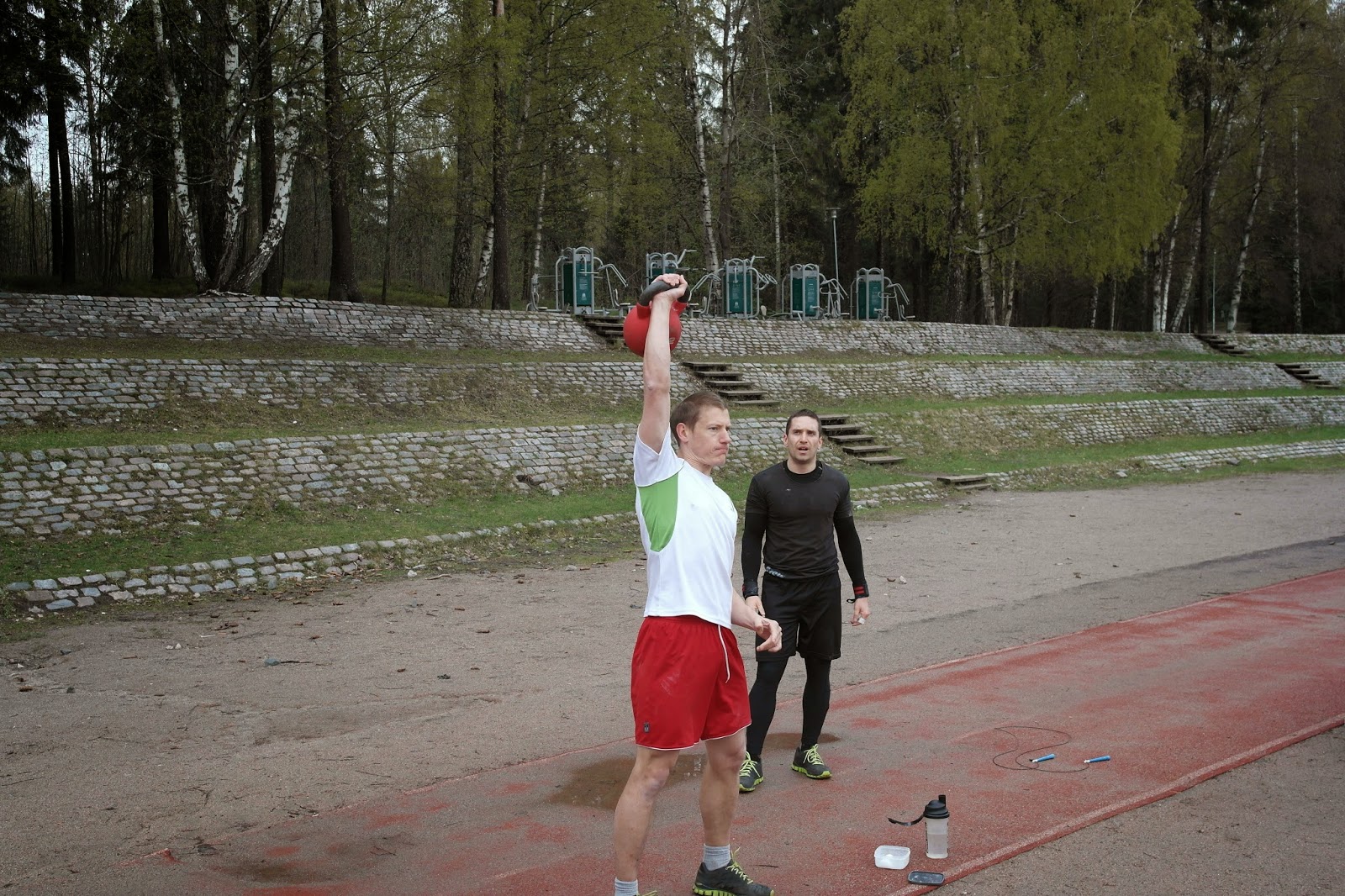 I'm very happy on the way Toni was dominating all of these events. There was a time in the past where most of the reps would have fallen for me to complete. But today we are in a situation where this stud has developed tremendously and we were able to complete most of the reps evenly. I think I did a little more burpees and sit-ups but other than that we made the reps fifty fifty.

Our strategy was simple. We got to keep moving all the time, no rest at any time of the workout. Once the other one wears down it's time for the other guy to step in. On the c&j's we had planned on making it in 4 sets of 10 reps but if it starts to burn too much, it's okay to drop it and let the other one perform. We didn't want to see those moments where you try to gasp for air and the kettlebell is not moving at all. Those sets were somewhat challenging but we were able to manhandle them nicely! 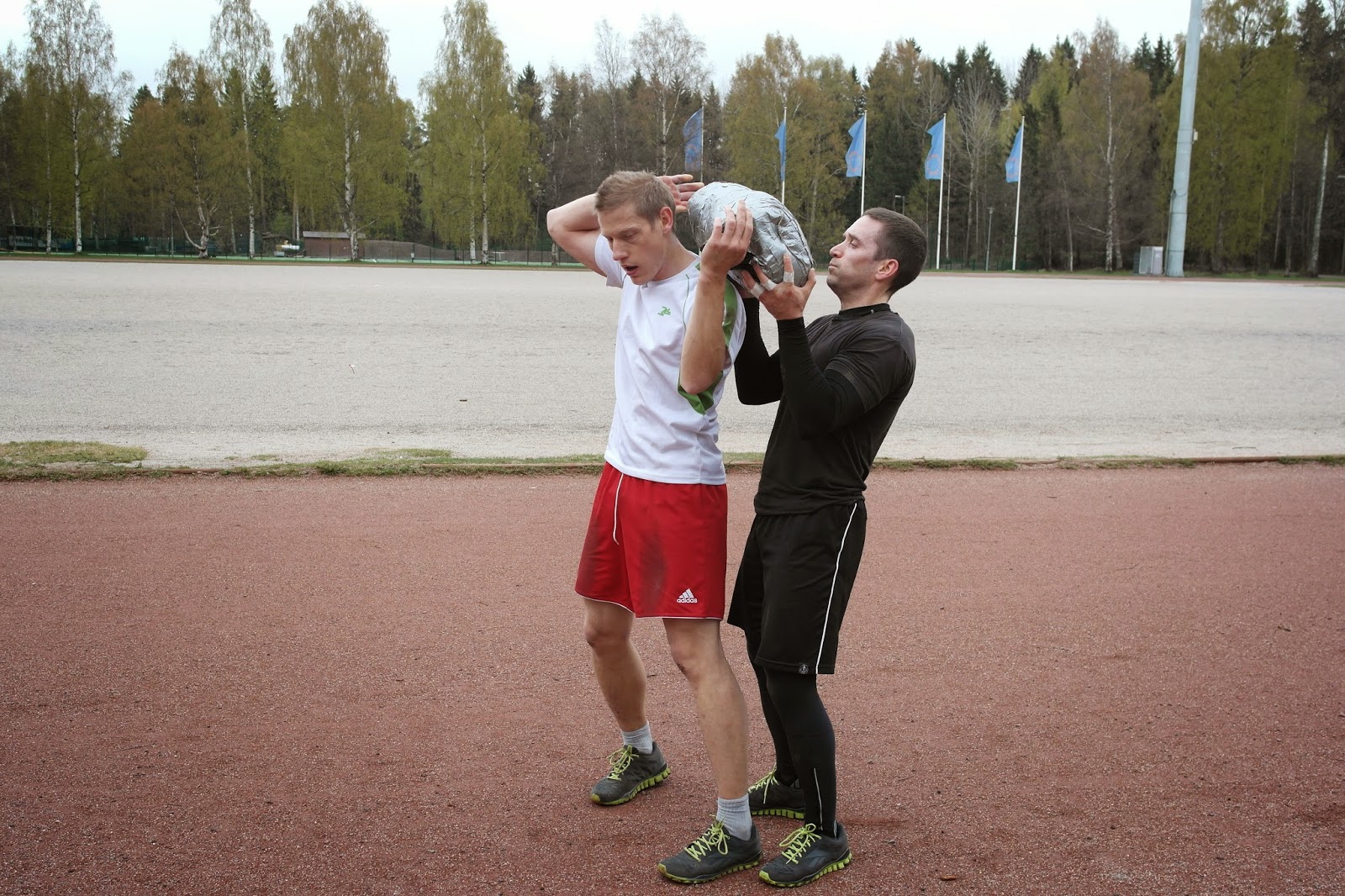 On burpees our plan was to do first sets as 5's and then singles, alternating after every rep. On couple of occasions I took couple of extra reps to let Toni rest for a few seconds. We were both moving efficiently and there was no need to stop and breath. Either of us was moving all the time.

On sit-ups I believe we went through it mostly in sets of 20 reps. That wasn't the most taxing element in this one. I tried to do them as fast as possible with some rage in my mind. This was something I didn't wanna slow down. 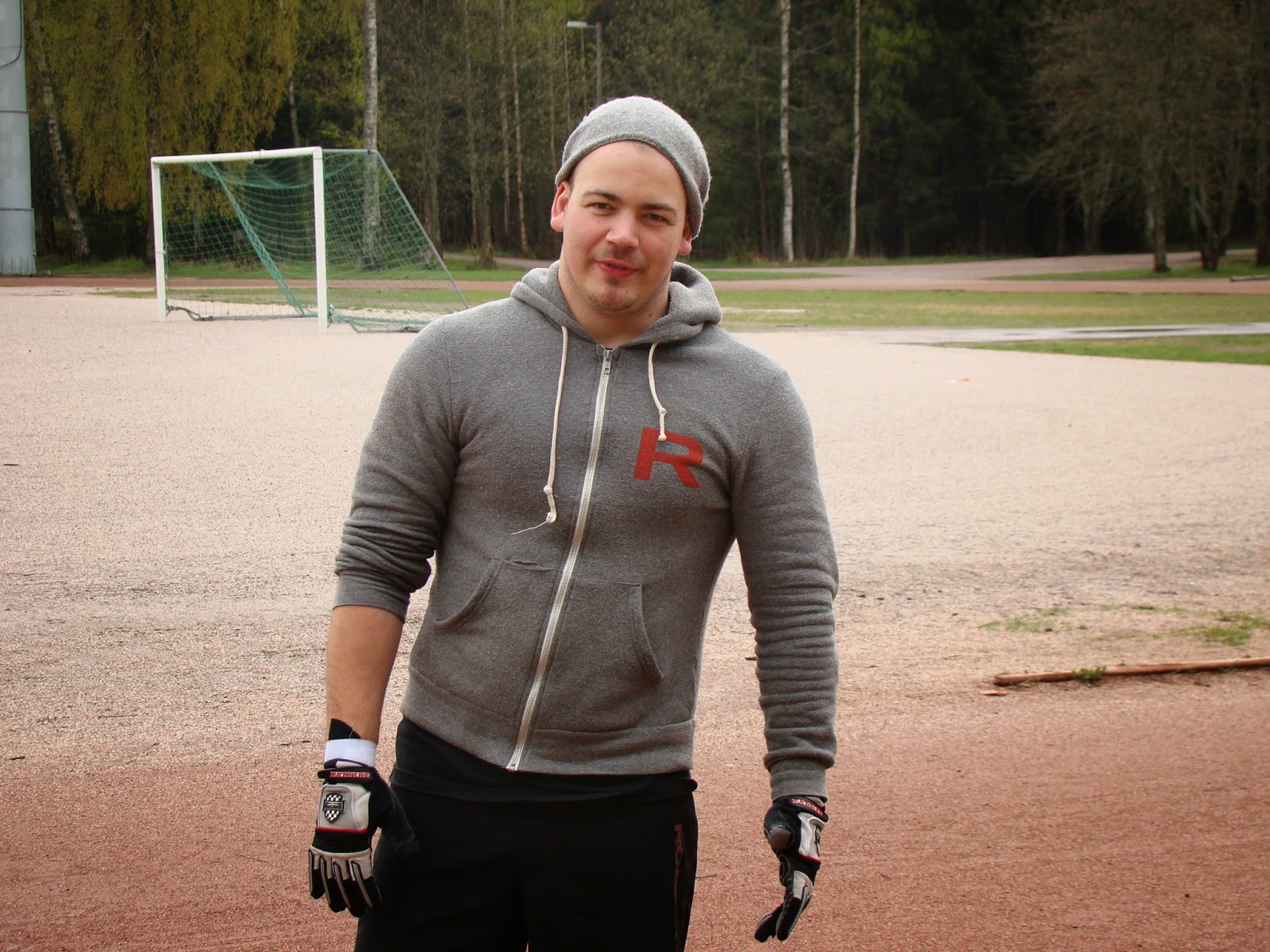 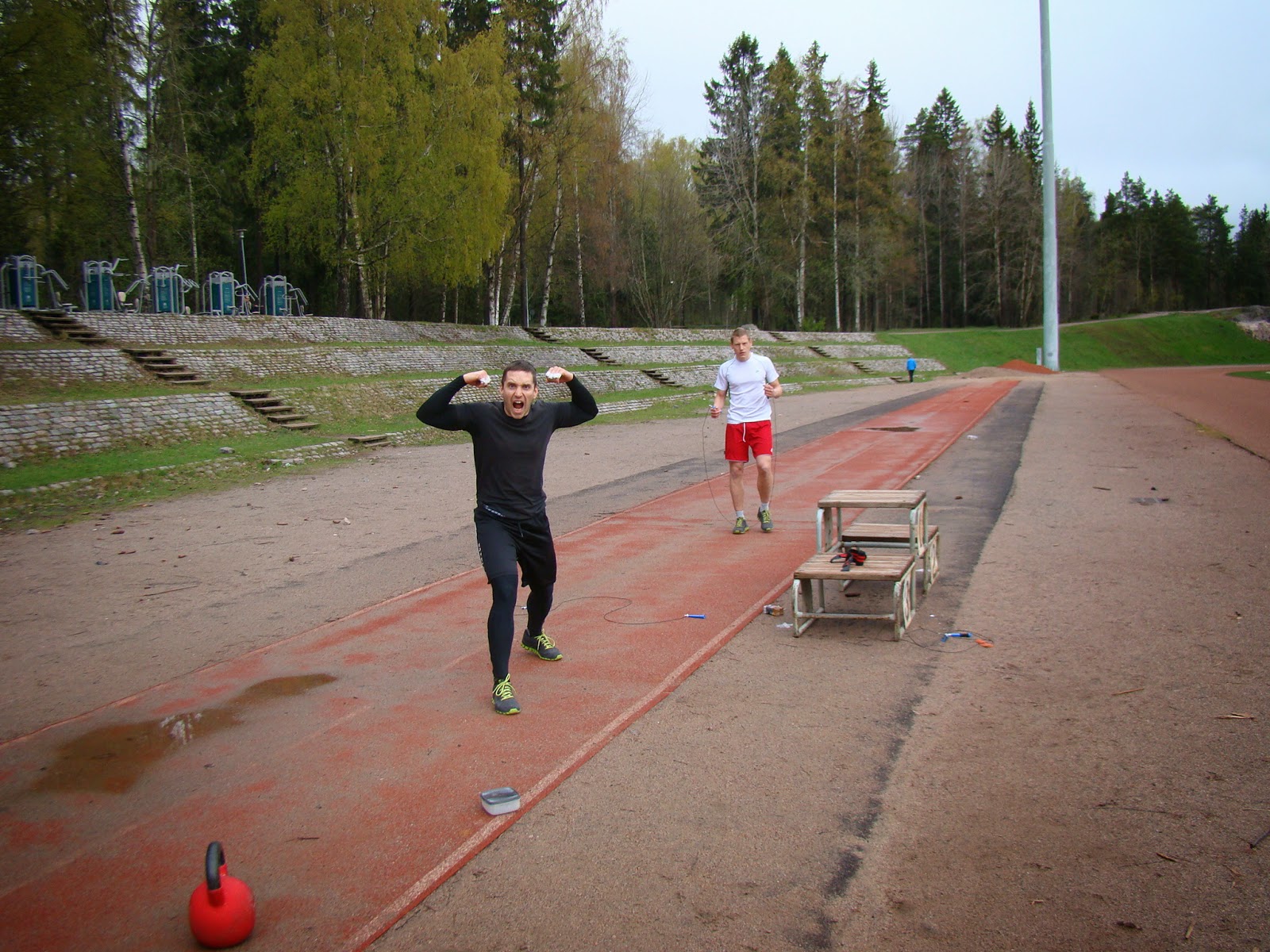 Lunges were definitely a pain in the ass, literally =) 100 lunges, which we divided something like 20's. It most definitely burned my lower body. Toni didn't seem to bother at all about this movement, the guy was enjoying his time! 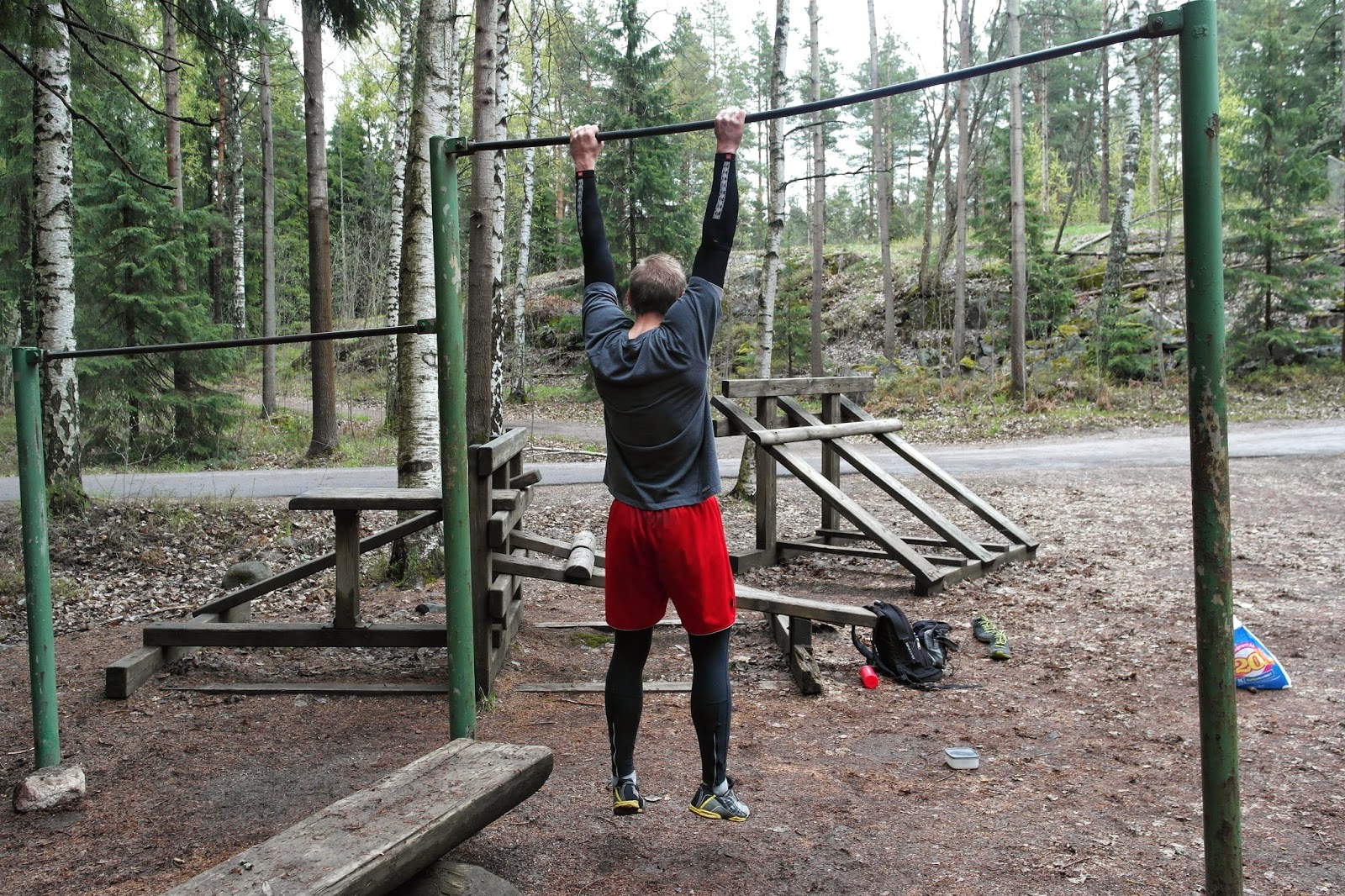 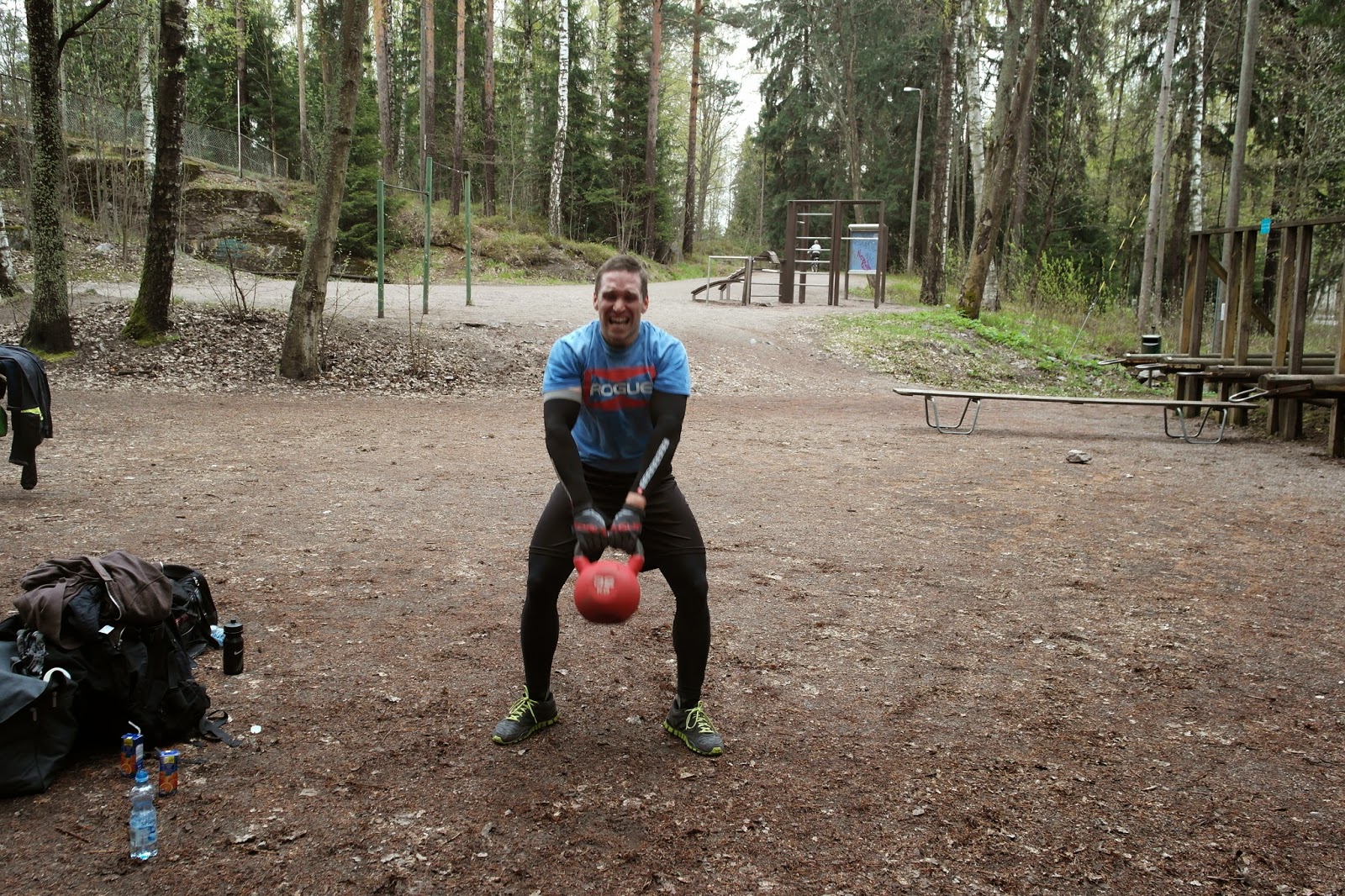 In the end it was time to hit another set of 200 double unders. We had some misses in both ends of the workout on du's but mostly it was okay performance. I believe these were the only one where we could have done better? It was a solid effort all the way from beginning to the end. Running was decent in all rounds. I'm telling you it sucked big time right after burpees! Huh it felt like we were on a slow recovery jog. But then after sit-ups it felt light. The element performed affected a lot. 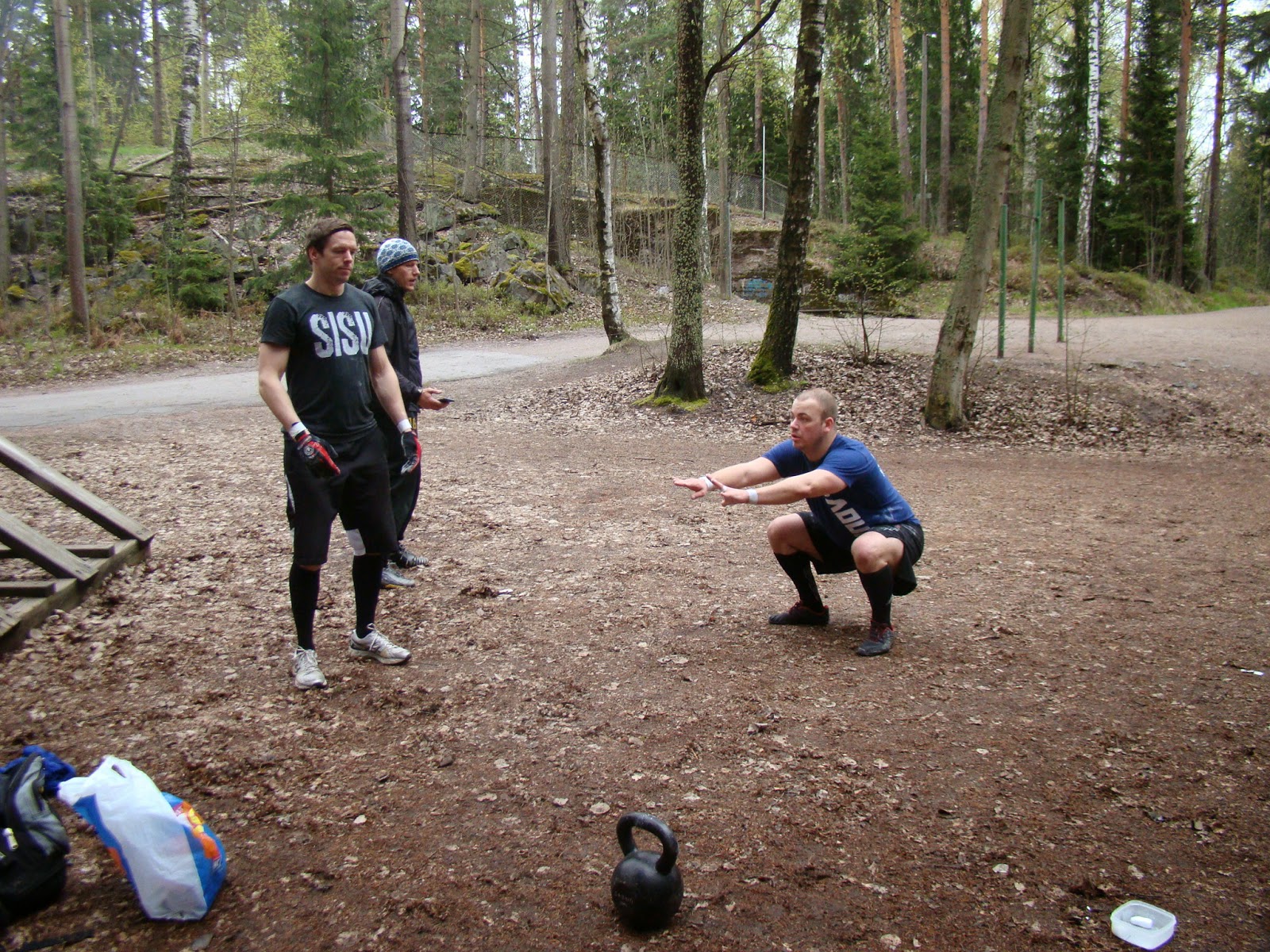 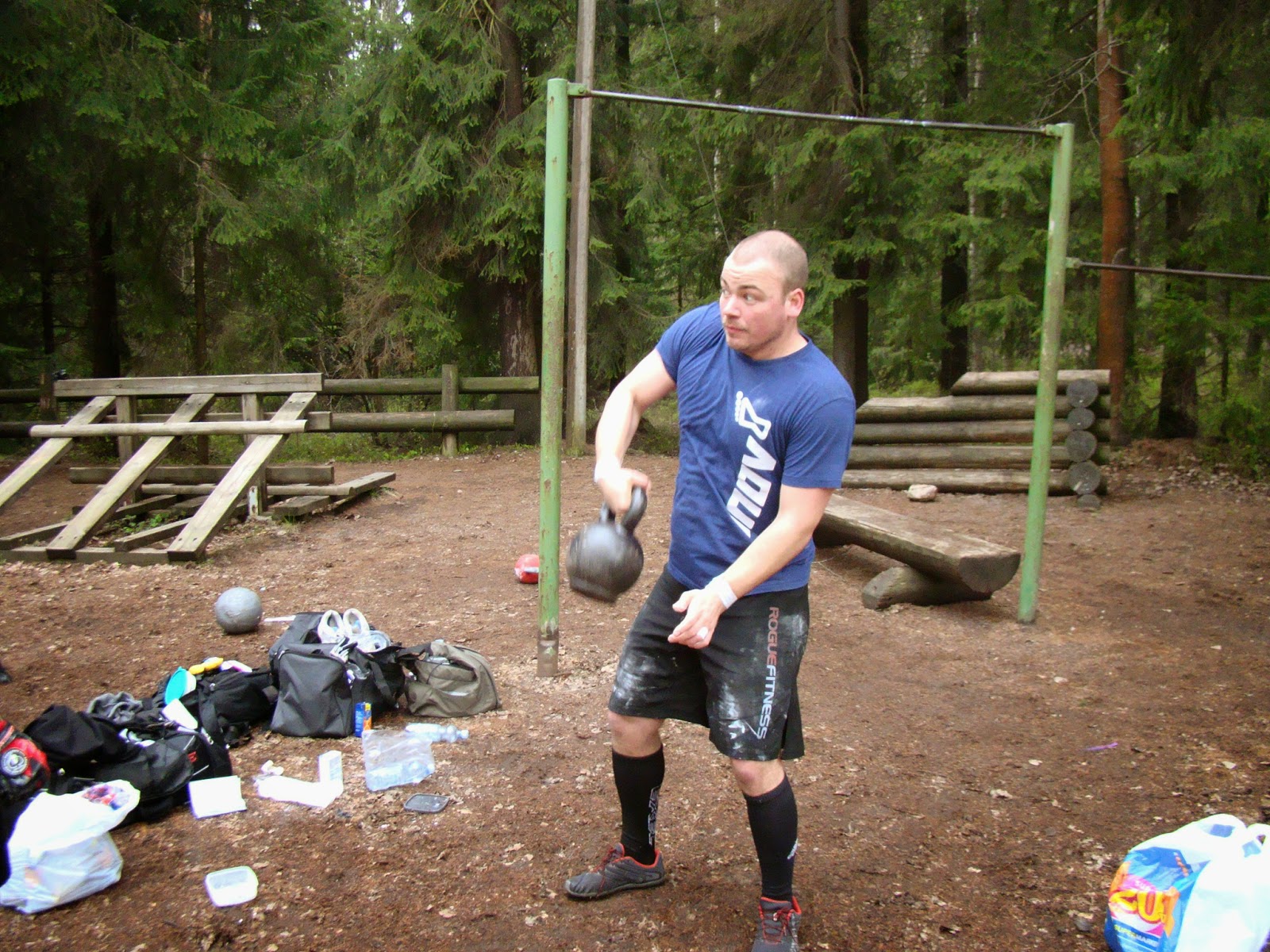 Sipa and Jake probably ran a little faster. On the other hand we nailed the kettlebell jerks in 4 sets whereas they had about 7 sets. That made a difference to our advantage plus we did Sandy lunges in less sets so we saved some time in the transition. We got this one with about 30sec shorter time. 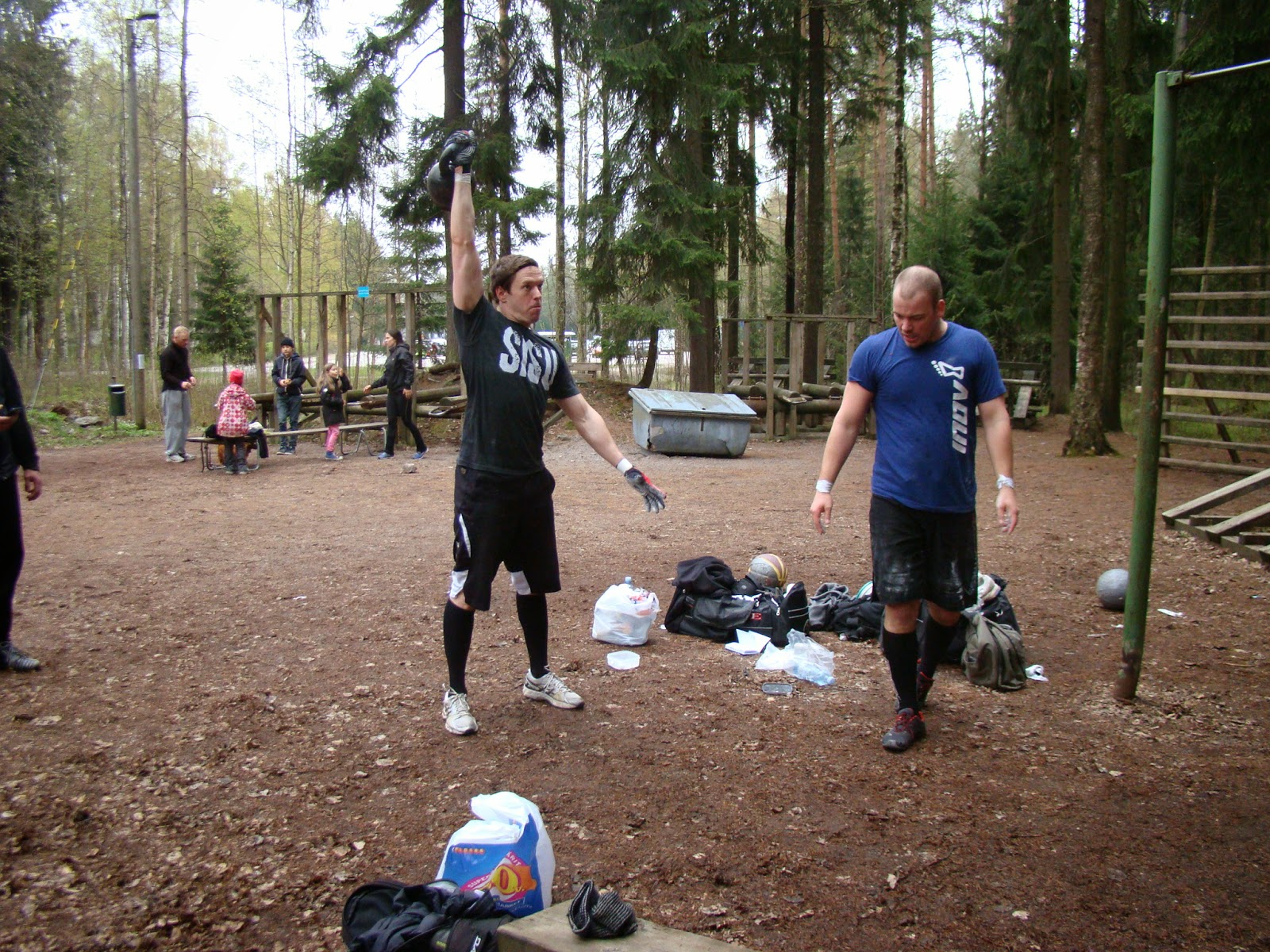 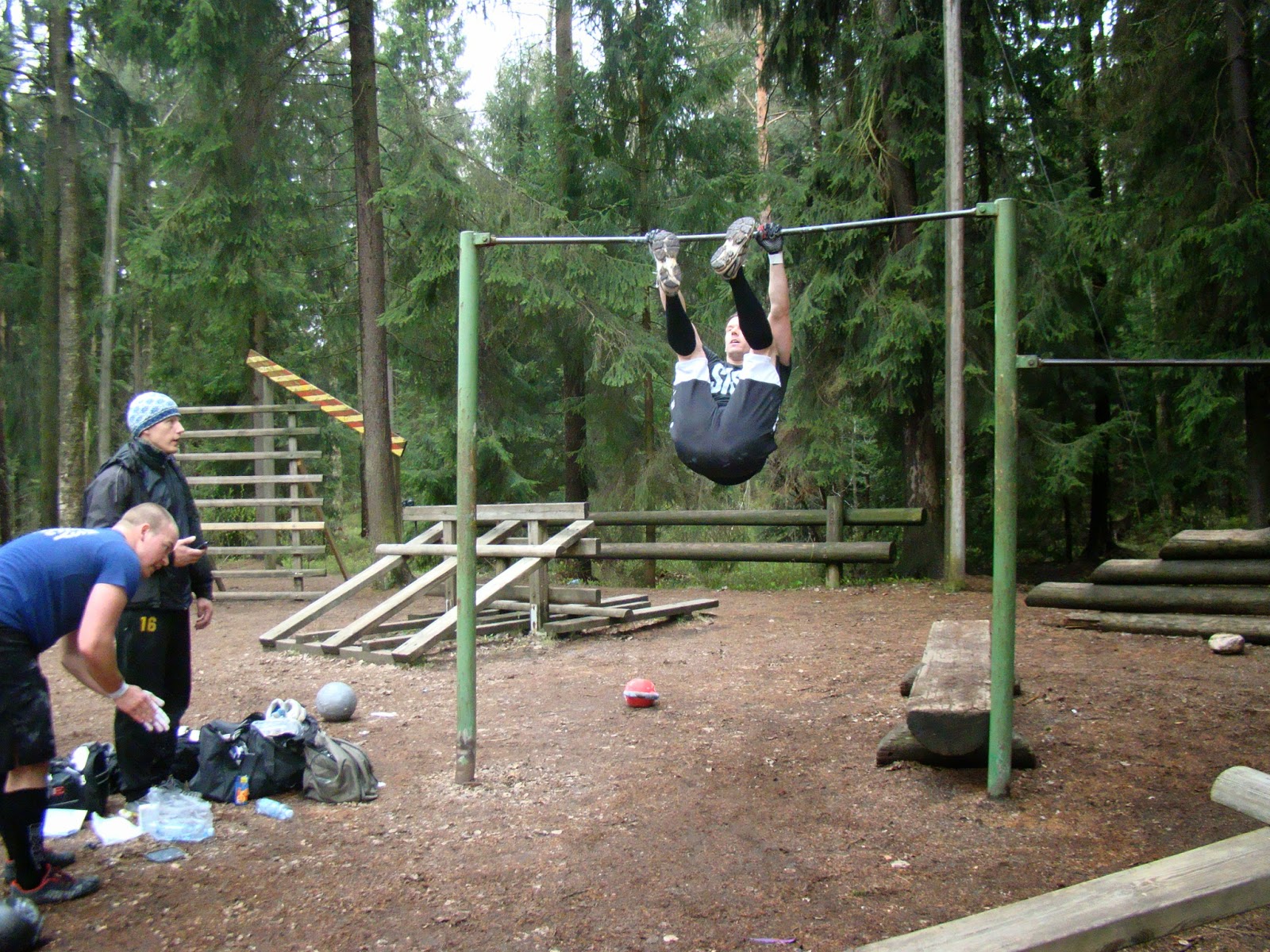 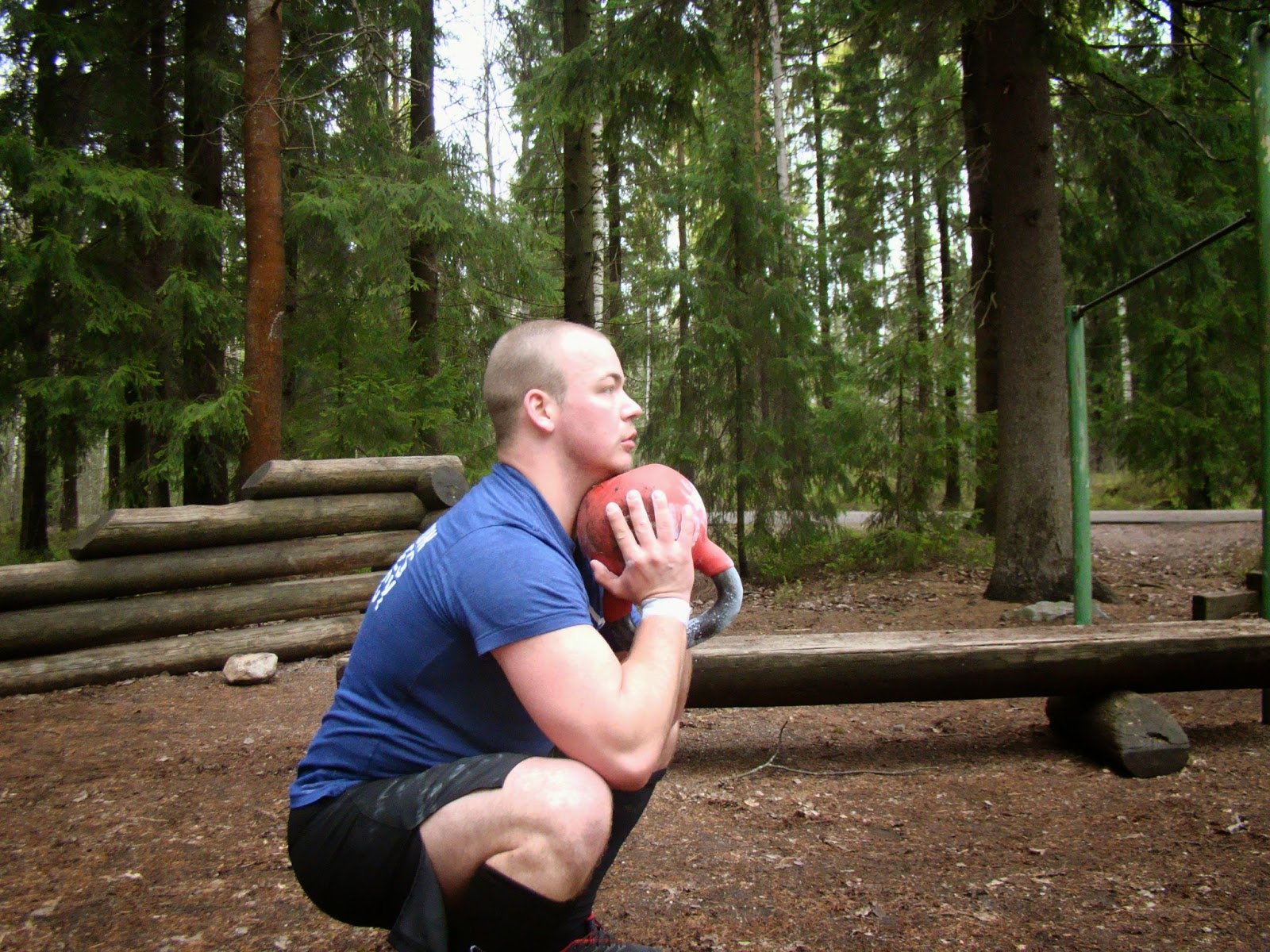 On paper this seemed like "the thing". As nasty as it gets. Traditional 21-15-9 rep scheme with a twist as you have to climb back with 15 and 21 reps in the end. Another twist was that while the other athlete is completing the required reps, the other one has a role as well. He has to stay in a static hold position. Either sit in a squat, hold a wall ball overhead, or dead hang from pull-up bar. We had 2 wall balls with us, Jake has a 10kg ball and Sipa 9kg. Those are both home made from a basket ball filled with sand.

The static hold was the surprise element at least to me. Haven't done anything like that. It really made a difference here. Especially on the pull-up bar dead hang. And think about the order of the elements. Both had to complete all 81 reps of all 3 movements, that is 81 wall balls, 81 pull-ups and 81 kb swings. In addition they had to do those static holds while the other one was doing his share. Lots of work. 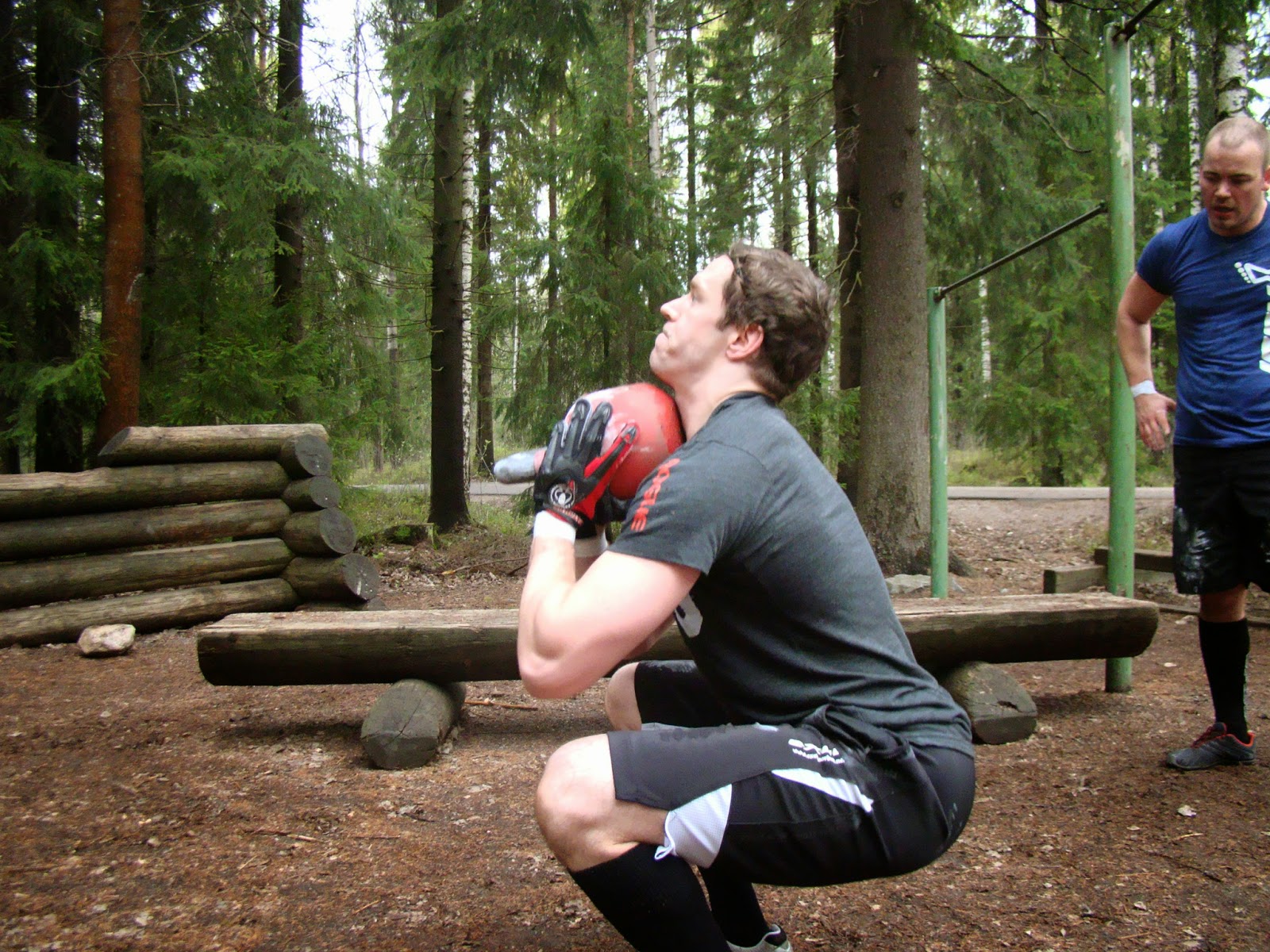 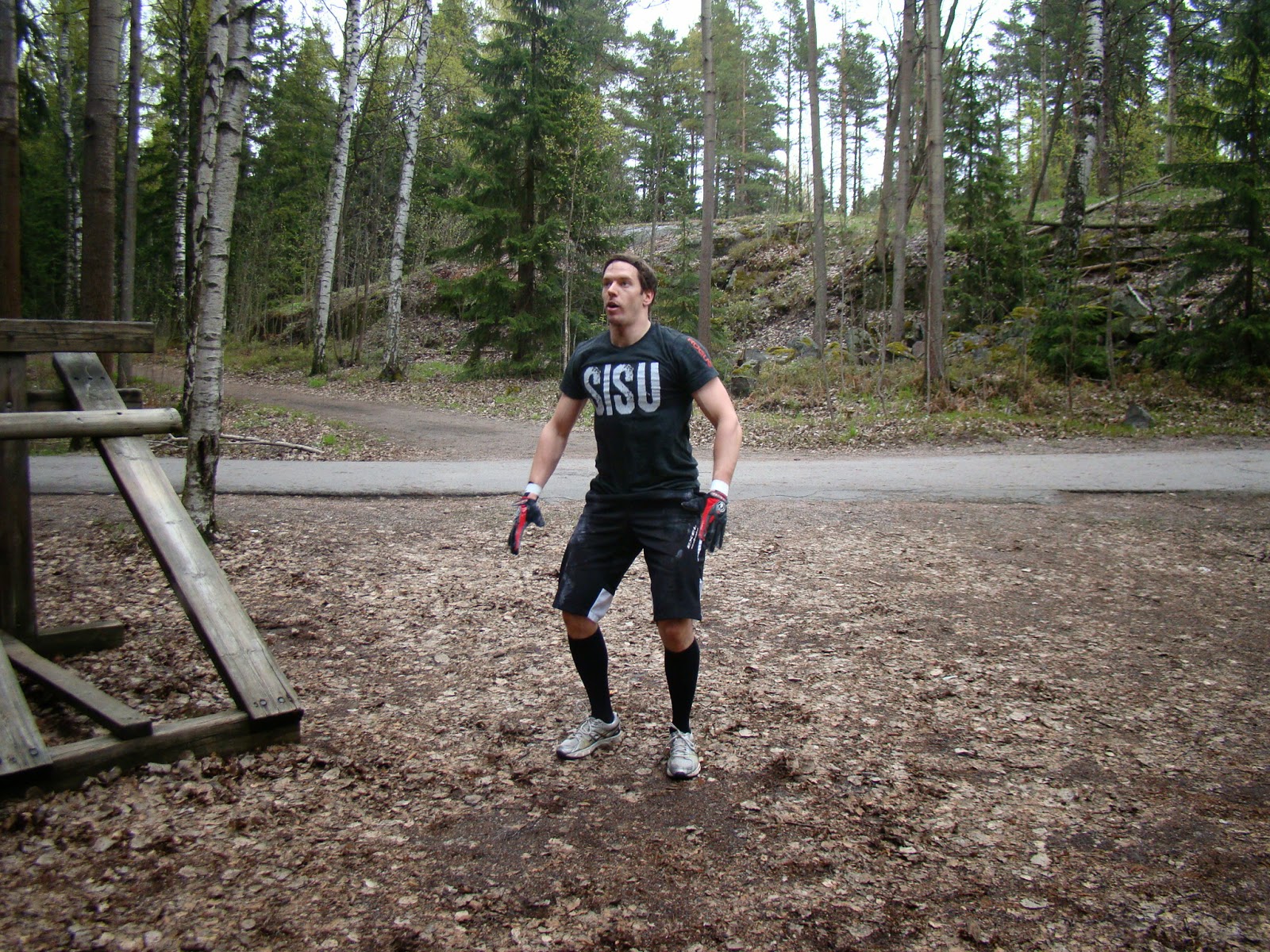 Toni started this one with 21 wall balls, I was in squat. After Toni did his reps, we changed positions. After my 21 wb's, Toni jumped on the pull-up bar and did 21 of them while I held the wb overhead. And then changed again. This was the name of the game. Imagine doing pull-ups and then stay up there for static hold as Toni moved on to kettlebell swings. That wasn't cool. 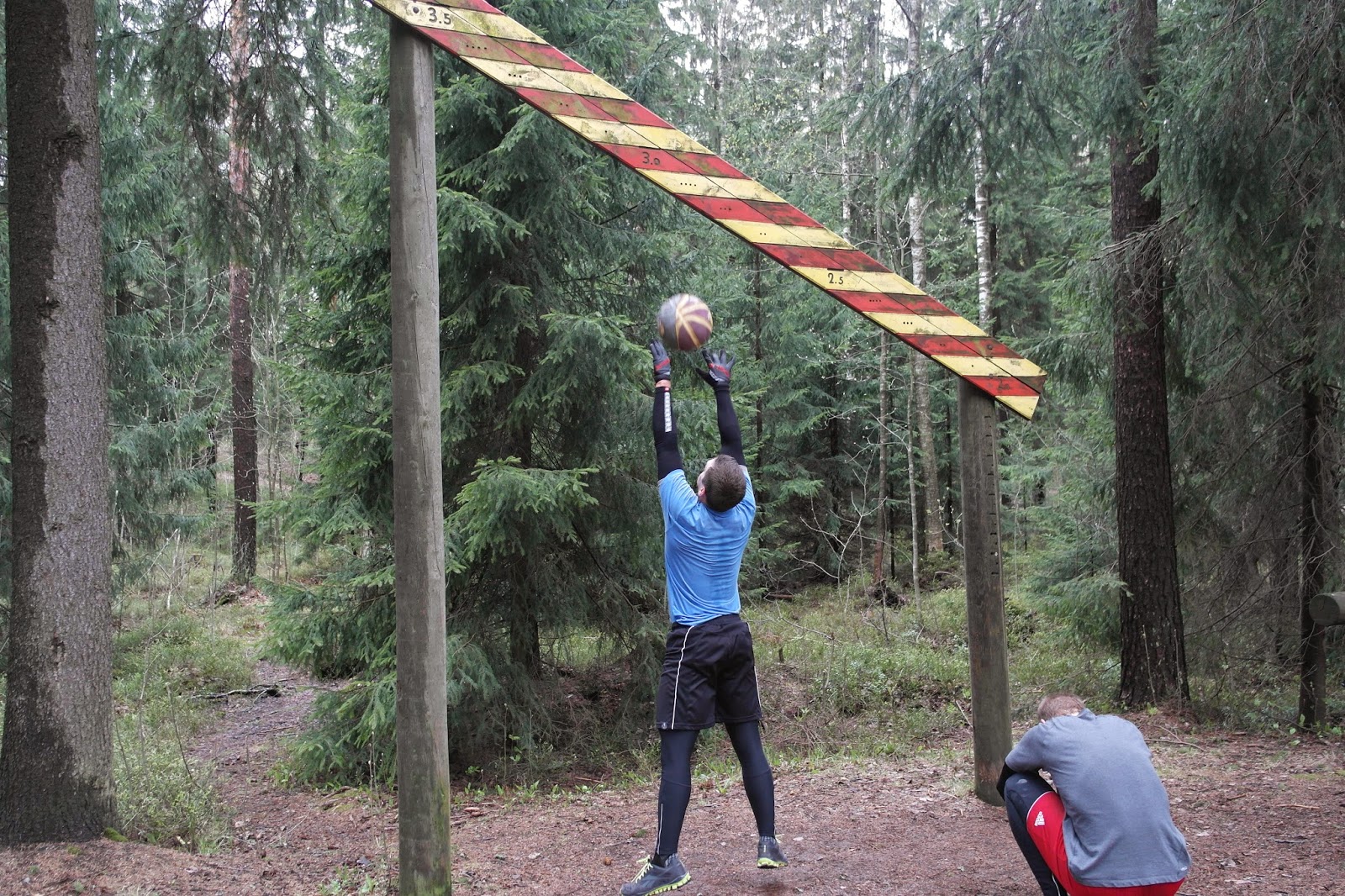 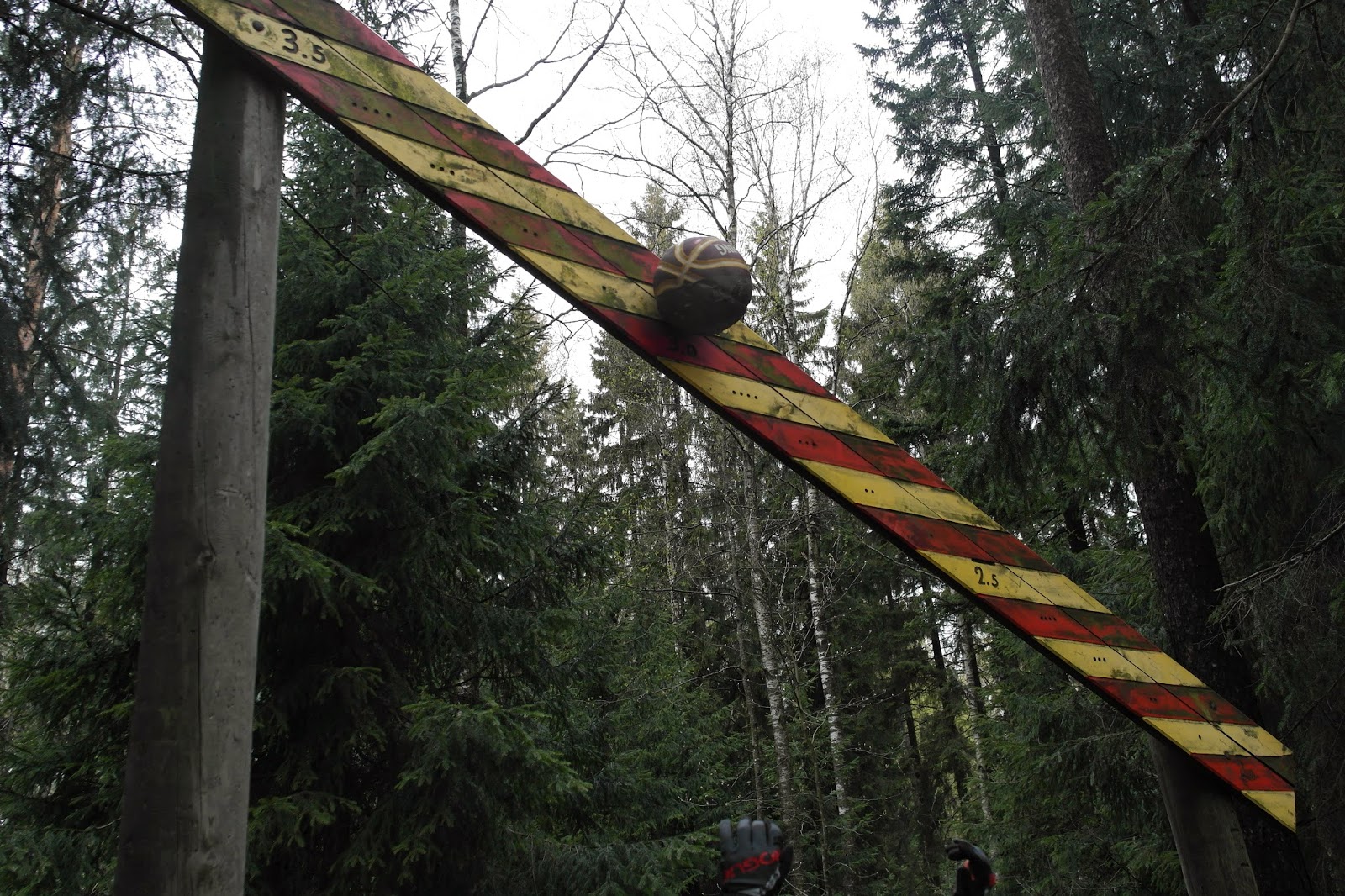 Jake and Sipa beat the crap out of us on this one. Guess there was about 4-5min difference. The difference was made mainly on the pull-up bar. We were evenly good on wall balls, all 4 of us. Even though it felt difficult in the beginning to hit the target with good enough accuracy, it started to feel better and better towards the end. Everybody had misses, it was different to throw the ball on this target compared to a wall. 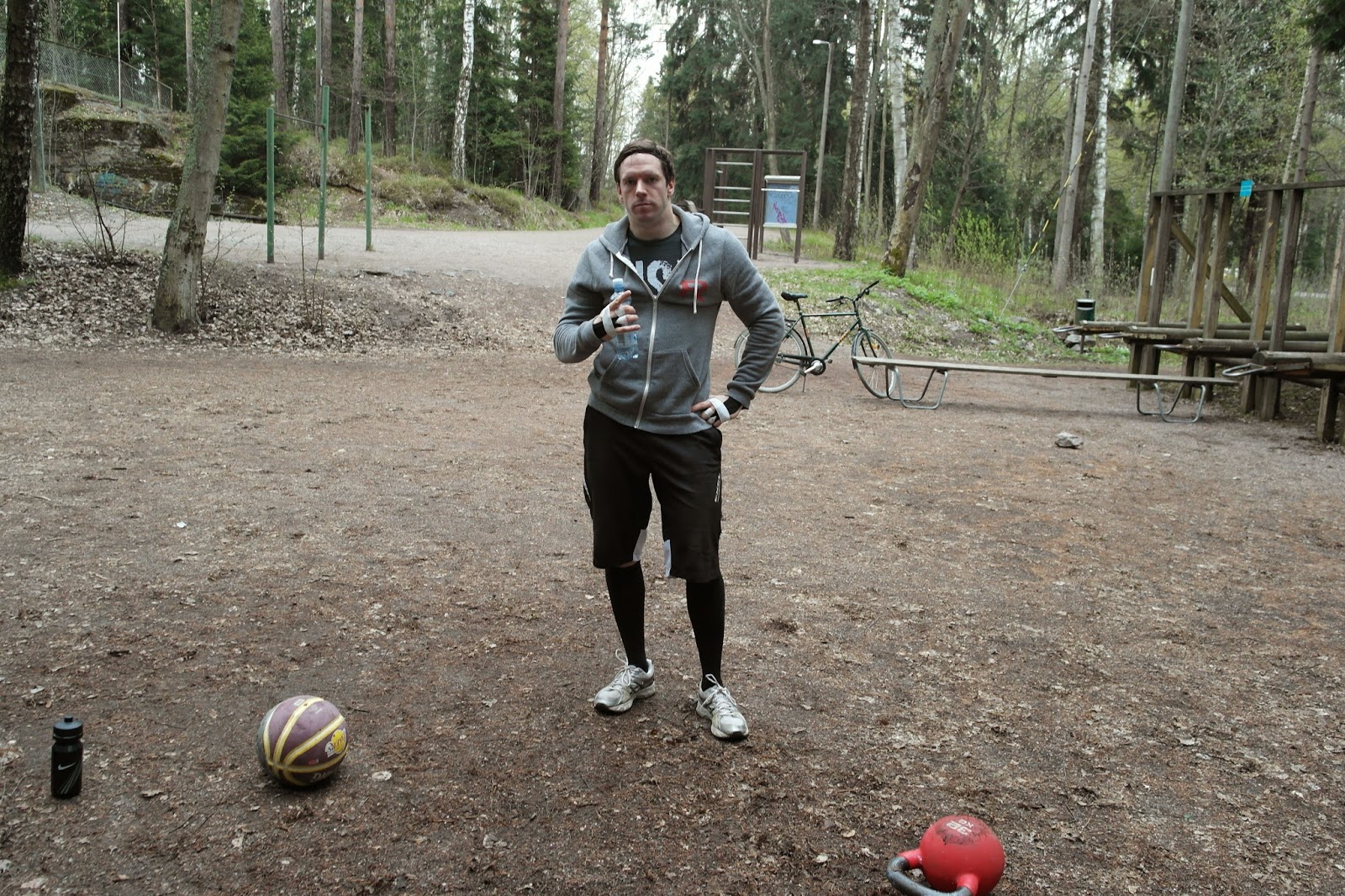 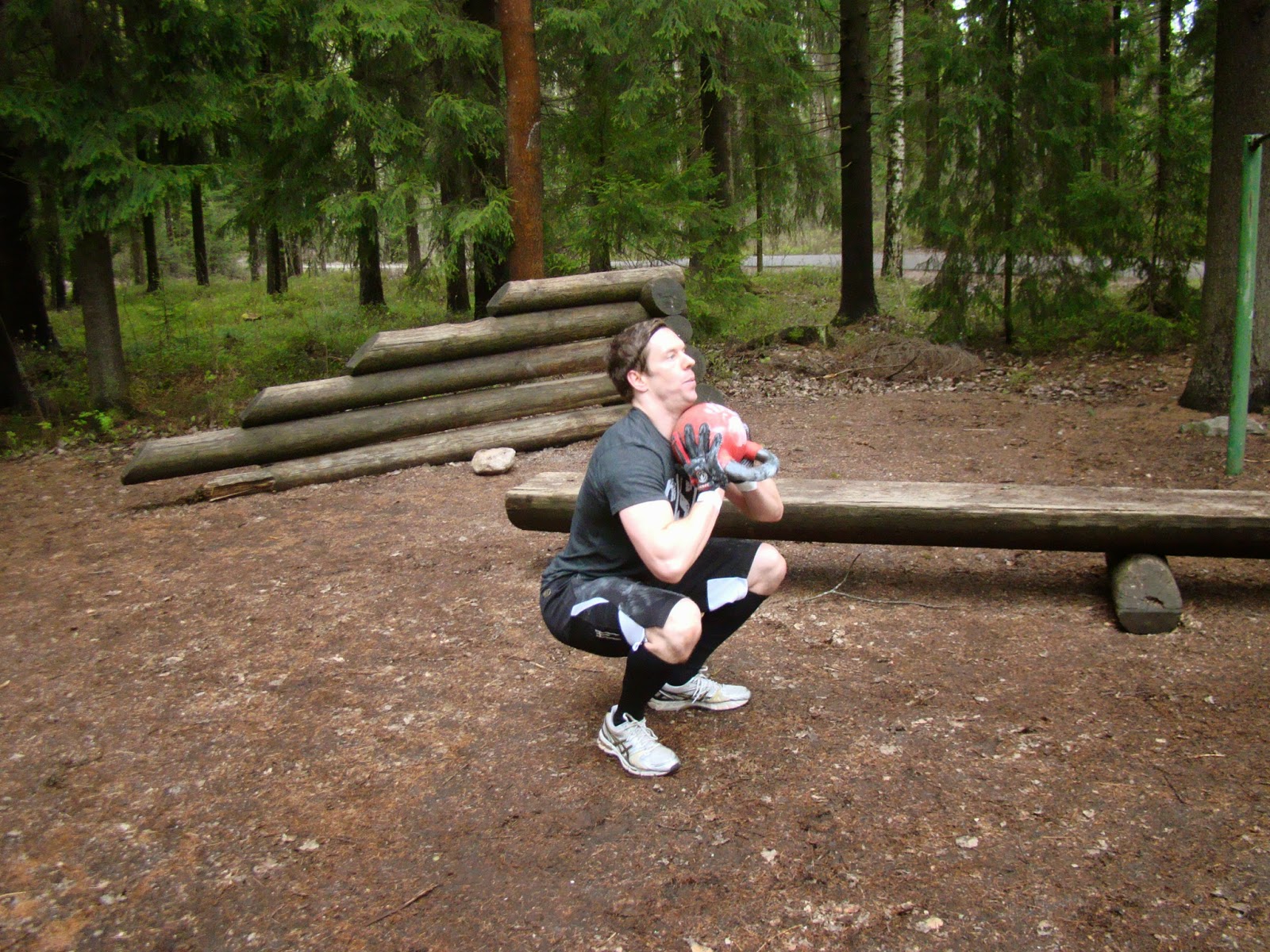 There was a good amount of reps to be done and those static holds had their influence, no doubt. Because we took some time on the pull-up bar, I got some extra recovery time so I felt pretty good during the workout. Forearms were definitely tingling because all the work but it was manageable. And palms were quite sensitive after the workout. We were afraid how it would affect the last event. They were sore as hell, same on the legs, it felt horrible. These 2 workouts had been taxing! The first one was 20+min and this was about 35min so no wonder we were aching in pretty much all body parts. 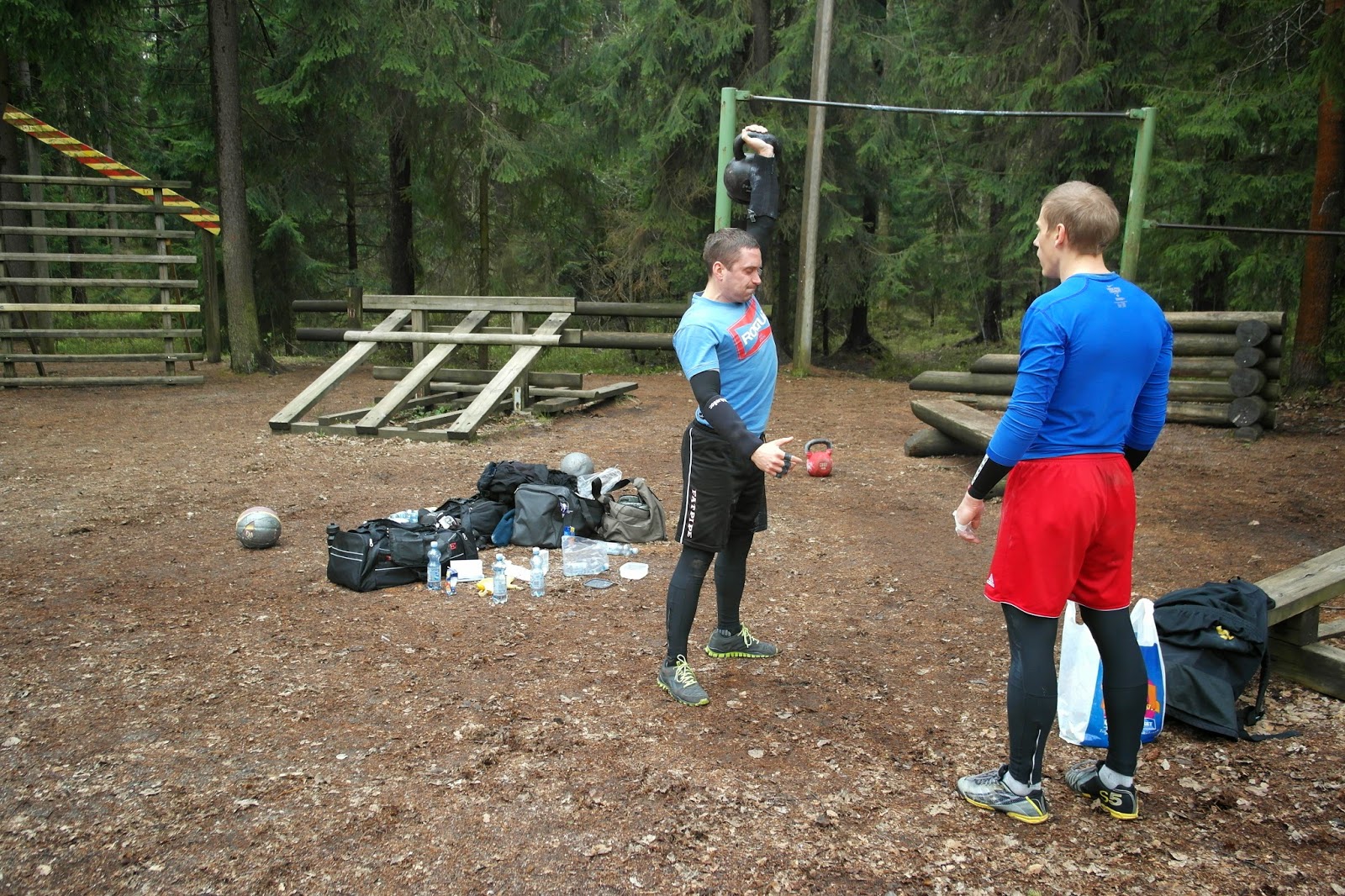 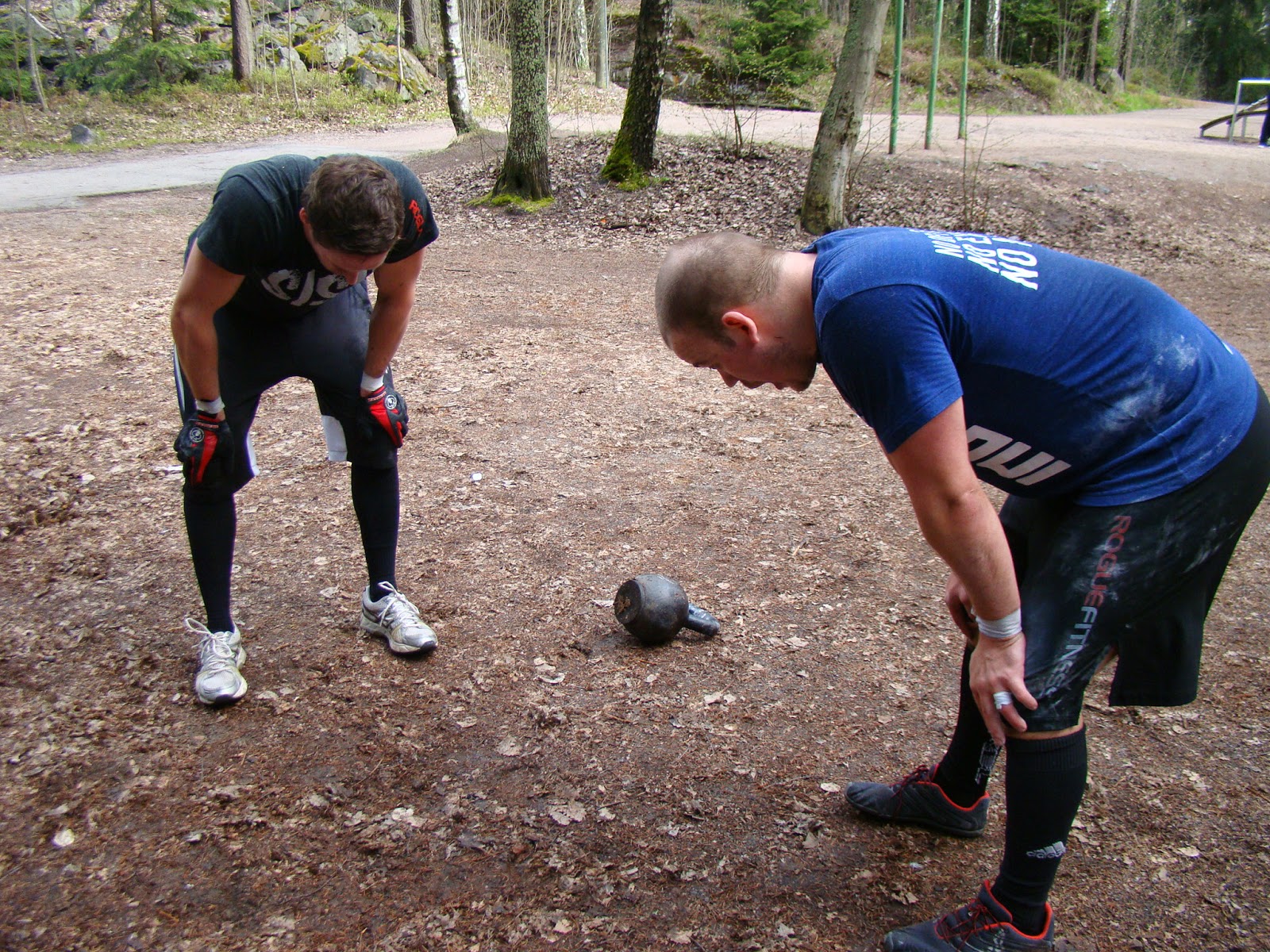 Event 3. Toni & Don 4rds + 32 kb snatch. Sipa & Jake 3rds + 17 t2b
My favorite! We had a good rhythm and fast heart beat from the very beginning. All 4 movements guaranteed heart rate was sky rocketing and muscles hurt. But it was the last event and we had a good vibe going on all the time. We nailed this one. No extra pauses, just kept moving continuously. The only strategy we had was on the t2b's and snatches. We had decided Toni would do 5's and I'd do 10's. We managed to follow that rep scheme for 3 full rounds, on the 4th round we both did something like 4's and 8's. 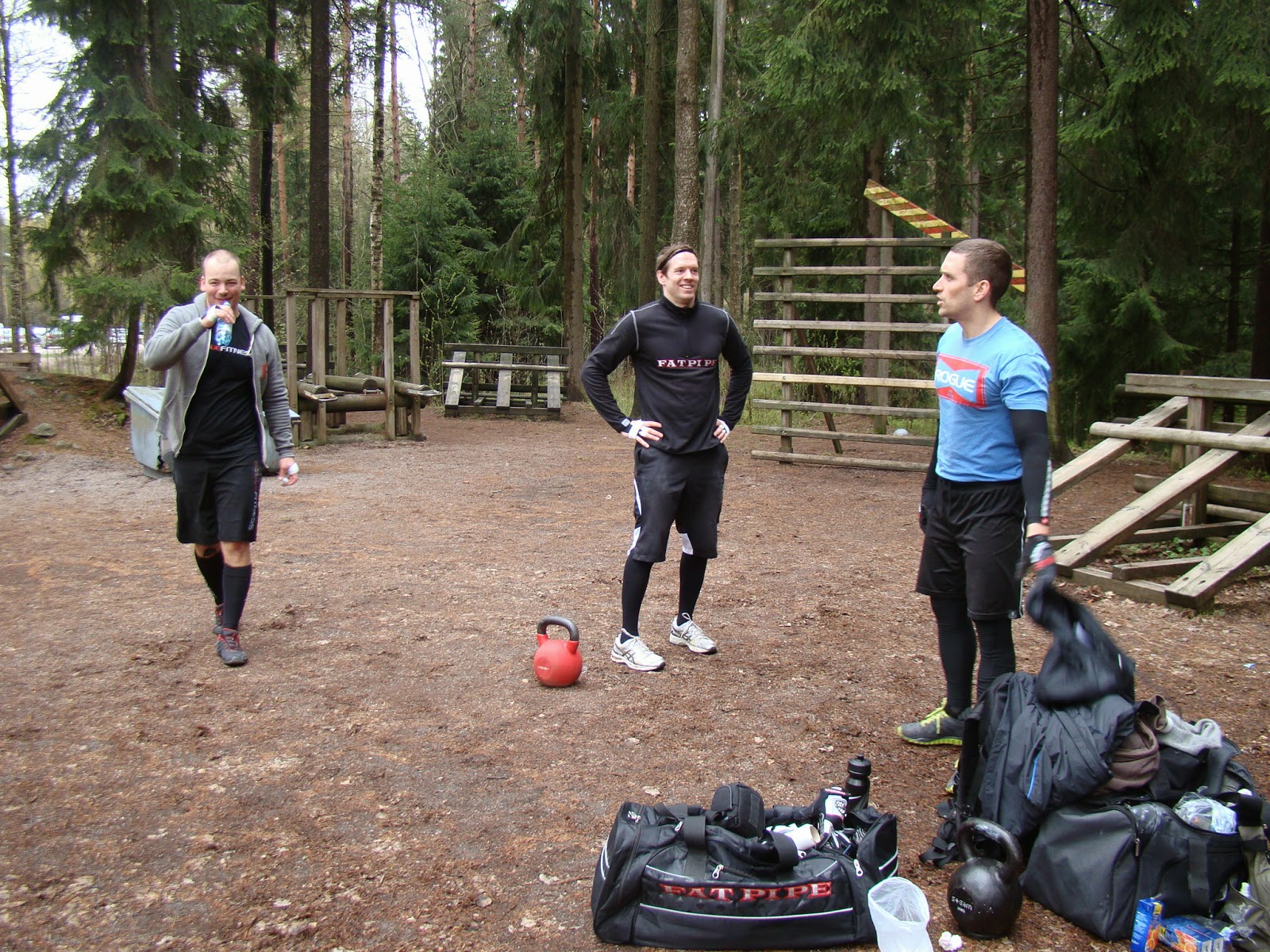 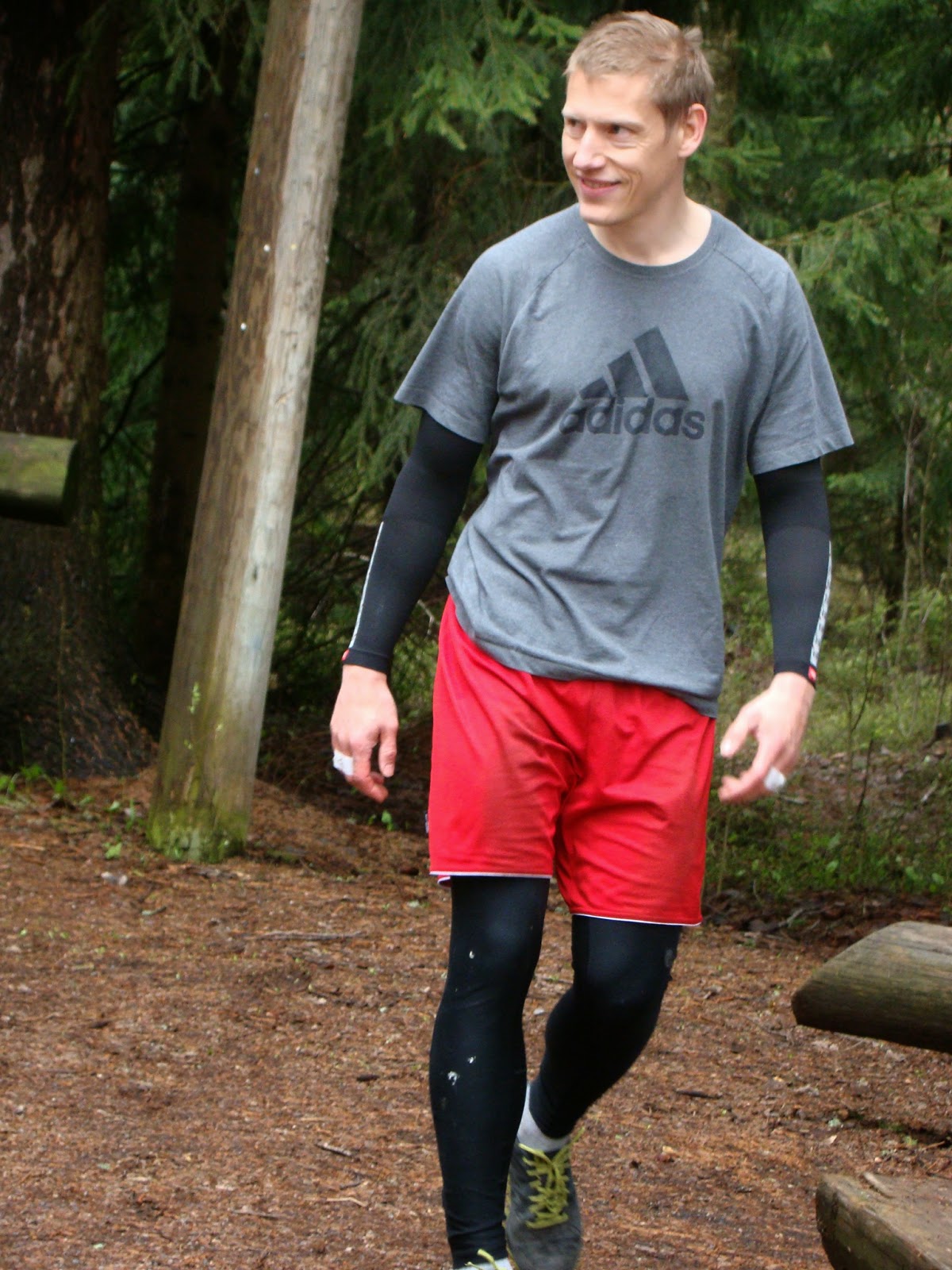 On snatches we decided to try complete them in 10's for as long as possible. Other than that it was more like "go by feeling", complete as many reps as you can, don't gas yourself but don't give slack either. That worked very well. We did goblet squats in 2 sets all the time, we did something between 8-12 in every round. On the squats I have no idea what happened or how many we did in any of the sets =) We just listened to the judge count the reps and talked during the workout. "You go!" 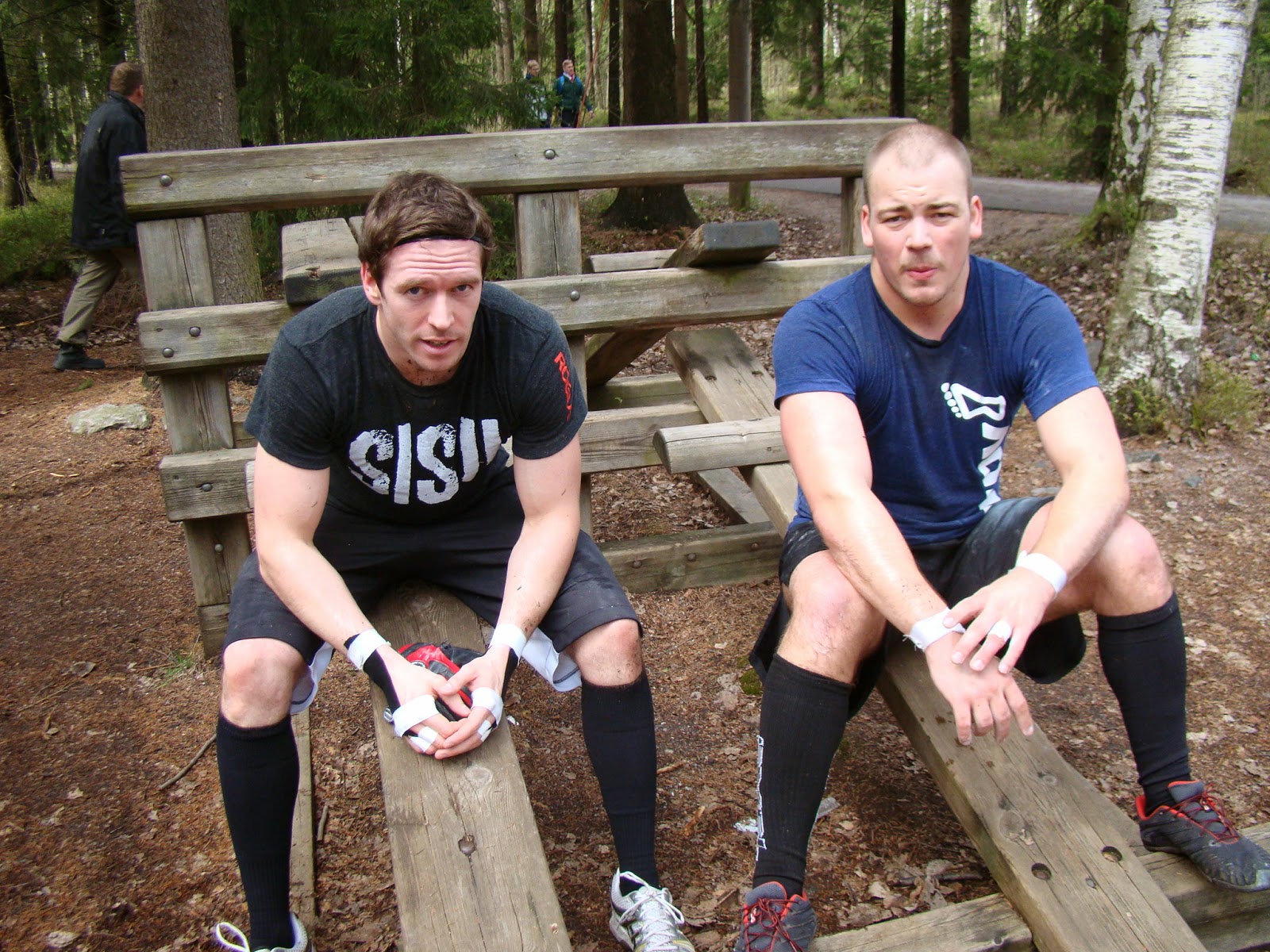 It was a surprise how well we moved, ourselves and the weights. We were in a zone. Must say I had a great training partner! This day was something like a perfect training day come true. Something I'd like to do if I had a bachelor party some day =)

We were able to top Sipa's / Jake's time on the first one, then on the second one we were beaten roughly. On the third one we made a comeback and got a little over 1 round better result. I'm very happy overall on my personal performance and above all our team's effort. Don't know what we could have strategized better on these events. Double unders could have been better, that I can say out loud. Other than that we kept the motors running constantly. It's pretty obvious Toni's engine has also taken some big steps as he was also able to keep on moving without stopping to gasp. That was some sick action mate! 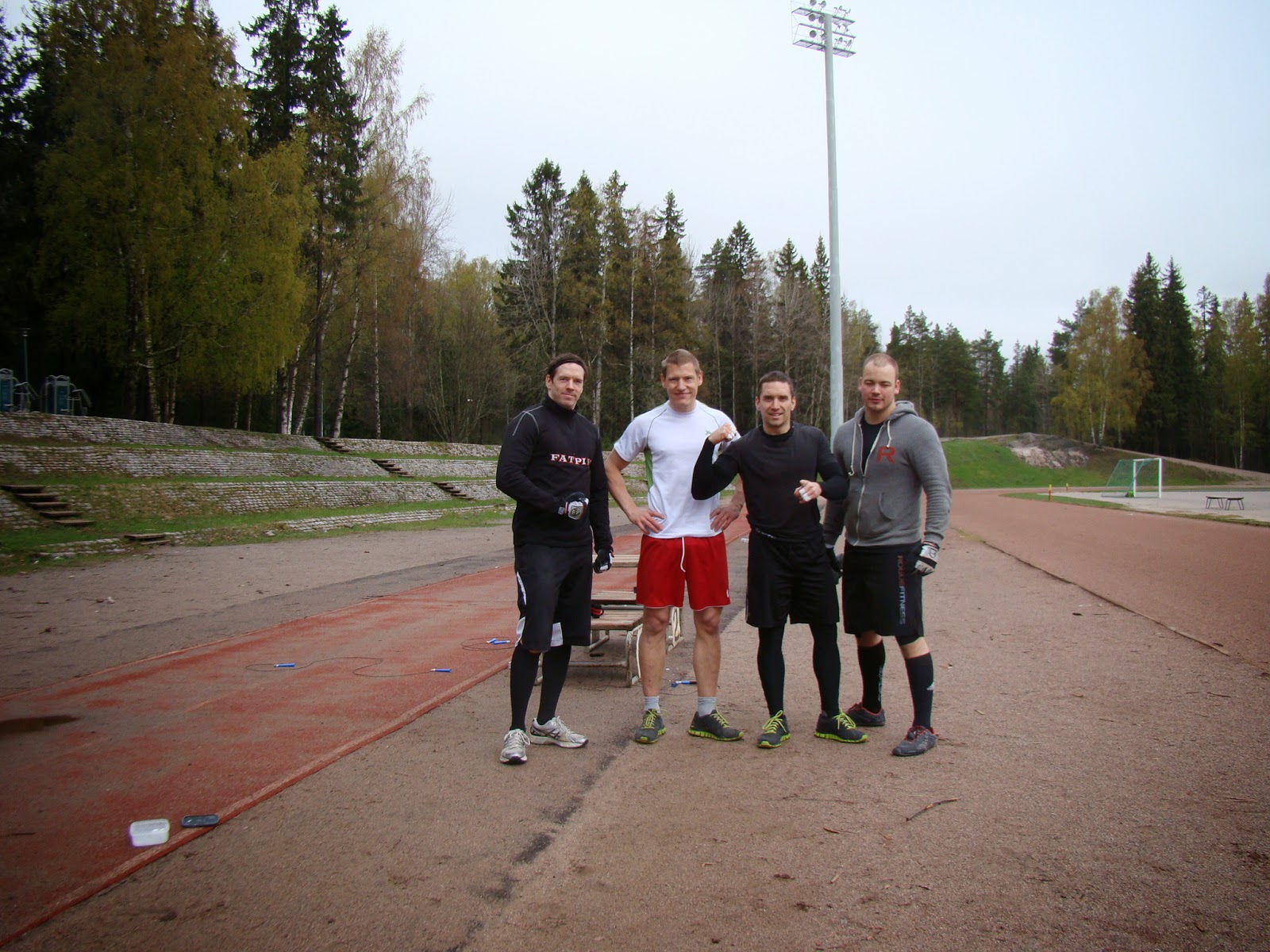 And probs to Sipa and Jake too. That was some beast mode crossfitting in every workout. You guys had a good and clear strategy as well in each of the 3 cruel events and you stuck to it. It was a pleasure witness your incredible work capacity. There was something cool in the atmosphere during the day. Thanks to Toni, Sipa and Jake for making this day possible. It was definitely a great training day!!!