Today is my birthday and for that reason I'm going to test some 1 rep max single attempts on certain strength movements this week. Last Saturday I did it on deadlifts (got PR of 200kg), today it was time for back squat and shoulder press. No metcons for today. 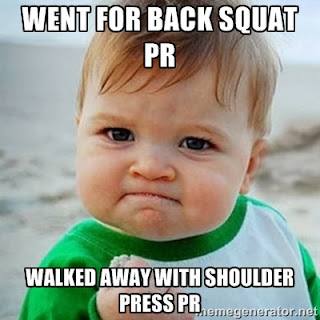 My legs have become tremendously stronger lately. I used to do various kinds of strength workouts, some sort of ladders, emoms and eccentric squats. Only once did I do sets of 3's and 5's. And the loads those times were great for me. On the 3's I got 135kg and on the 5's 130kg. So I had some huge expectations entering this day. It turned out to be a little short of my goal on the back squats as I didn't get 145kg up. However, there's also a positive side. Doing a squat of 140kg felt good and as you see on the video, it wasn't that tough. I've done tougher lifts.

For some reason it got mental at that point I guess because the 5kg leap is small but it felt heavier. I should have got that PR lift up, no doubt about it. My legs have become so much stronger lately and I know I'm capable of doing heavier lifts. That 140kg lift is a good signal of my possibilities. I'm gonna keep on squatting more towards the end of this year and my goal of squatting 150kg is still valid. I'm gonna make that lift some day!


Recap of the training day

Okay, having a birthday and missing a big lift got me a bit down. However, there was another strength element left in my schedule: shoulder press. When was the last time I did presses as strength training, no idea, it's been ages. Had no idea how this one would turn out but at least my shoulders have done a lot of work in the past half a year.

I did 40 & 50kg sets for warm-up, then completed a couple singles. My previous PR was 70kg, done back in April. It was a lot of work, that I do remember =) Now it was time to update these figures and walk away with a PR in my pocket! Got that old record up rather easily. Wasn't light but it felt like something more is waiting for me. Upgraded it to 72.5kg, played it safe and wanted to take at least something heavier up than 70kg. Got it and decided to add stakes. 75kg was next stop. I tried it once, got half a rep, racked it, took a moment to think about it. Decided to put all in, went after the barbell, took a deep breath and pushed it with everything I had in my tank. Finally it went overhead and a new record saw the daylight, 75kg shoulder press! That's huge for me. Unfortunately my camera wasn't rolling anymore on the last rep so the last one you'll see on the vid is 72.5kg.

When I look at this day in a bigger picture, it was great. Adding 5kg on the shoulder press 1-rep max load and completing a beautiful 140kg back squat, these numbers are good for me. As I wrote earlier, I'm gonna add more weight on the squat, no doubt about it. Today's 140kg was the best I've done. This was the third time I got it up. This was clearly the best and purest one. I'll have to be happy about my birthday training day =D