The weather is freaking summery in here! And I love it. We were gonna go to the gym in the morning but instead it turned out to be a one and a half hour walk in the parks, forest and almost downtown Helsinki. Awesome quality time with my baby. On our way back we took a shortcut through Eltsu and "accidentally" stopped there to do some bodyweight training. There were a lot of people so we got inspired to do cartwheels and handstand. In the evening I went to the Box and worked on my pull-ups in various ways. It's a bummer I have to be cautious of my hip flexors. It would be great to lift heavy and do proper metcons already! 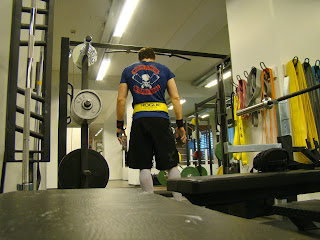 Playing around.
For some reason I have thought for the last couple of months that it would be awesome to master a simple movement like cartwheel. But those have always looked pathetic and there hasn't been a gymnastics coach training with me so it's not something I would start practicing on my own. Now that I had Pauliina with me in a place like this it felt right to take couple of attempts. We actually played here quite a long time as we both felt like we progressed a bit. This is something gals seem to be better at, I guess they just know how to control their body better =)


After playing around with cartwheels I also took some handstand hold for fun. There were a lot of people in Eltsu improving their fitness. And mother's day was seen in the picture too. Lots of families were walking outdoors in a beautiful and sunny Finland.


Pull-ups.
I got a chance to have a training session with Jasper, at least for a while. Our schedules didn't quite match but it was great to have couple of fist pumps and hit a workout. He had to go and I stayed to work on my pull-ups in different styles. Starting with pull-ups with some extra weight. Mostly triples, built up to a heavy set which turned out to be 22.5kg. Then I dropped down with more reps. Pull-ups are great but to be honest doing weighted versions of them for strength is kind of boring. Feels like a meathead.

This was much more fun! And I got a little heartbeat up at the same time. I could do muscle-ups all day every day! I'm so very happy those are rocking pretty well nowadays. Both bar and ring mu's. Mu's are also something I can do without having to stress how hip flexors are doing. Of course hip work is in the play but this movement is not the one putting too much pressure in there.

First 3 minutes were all about muscle-ups, next 3 minutes were c2b pull-ups and last 3 minutes were normal pull-ups. I increased the number of reps after each movement because it got easier towards the end. My lats were on fire on the regular pull-ups. I mean they hurt like hell. I had to go foam roll my lats and stretch them out for quite a bit after the workout. This made good to my body!

Bench.
This is rare. What I really wanted to do was a bad ass metcon but I just couldn't figure out what I would do without using my legs that much so instead, it turned out to be a bench session in the end. Three sets of 10 reps, climbing. Last set was 75kg.


Then I took couple of heavier singles but my upper body was smashed at this point already. Hopefully tomorrow morning I wake up with fully healed legs so I can start doing some real work!