At the end of hard core squatting in the Smolov phase, it was only natural to try one rep max for back squat. Today was the day. Turned out I got the prize I was looking for in the form of a personal record kaboom! Then couple of heavier deadlifts, and tough interval action which burned my legs bit time. 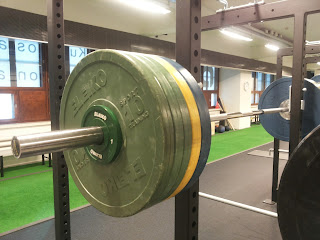 Strength.
My back was still a bit tight from all the heavy squatting lately. Legs were great, and hips felt also awesome, and ready to pump it. My mobility in the beginning was longer and more extensive for a reason. I wanted to nail these. There was classical foam rolling, dynamic stretching and rubber band work to get joints ready for bigger loads. 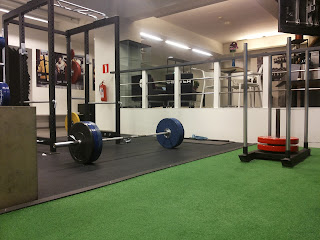 Took 60 / 90kg lifts for couple of reps, then purely singles starting from 110kg, and then went up in 10kg jumps up to 140kg. That was the first weight that felt kinda heavy. The previous ones were easy ones. Up to 145kg I took them casually, and with confidence.

From then on I did a lot of mental work. Plus I did something awkward. I put 150kg on the barbell, and then added 10kg plates on both ends of it to make it 170kg. Stepped up with it to make it feel heavy on my back. Held it for couple of seconds, and dropped it back on the rack. Then removed the 10's and went after 150kg. Of course not right away because I wanted to the legs to feel fresh. I've only lifted 150kg once in my entire life so getting that up was almost like a record breaking lift for me.

The reason behind visiting 170kg was psychological. After that 150kg felt much lighter in my back. Turned out to be a good idea. Got 150kg but it was heavy though. This was my goal of the day. I'm pretty sure I would not have gotten this load up before Smolov. Maybe 145kg but not 150kg.


I actually told one fellow trainer at the gym I got what I was looking for but I'm hungry for more. For a while I was wondering how the heck am I going to get that but then the same strategy came down as with the previous lift. Those 10kg plates appeared at the end of the barbell. Stepped up with 172kg, and held it for couple of seconds before re-racking the bar.

Lots of inner talk of being able to make it, then stepping to get the bar on my back. Huffing and puffing, get down, and grind it all the way up. Celebrate afterwards. I'm very happy of making this new PR of 152kg real.

After squats I took couple of heavier deadlift singles. There wasn't really much deadlift reps to be done today. I guess it was 5x60, 4x100kg, and then just singles leading up to 200kg. On the last two I felt like I wasn't able to maintain such a form as I'd like to. Especially the last one so I didn't put more weight on the bar. It's still awesome to hit 200kg any given training day.


Intervals.
Damned this was cruel. It was not classic emom stuff. The main purpose was to go hard on every single set. Not pace it out and save energy. No. Do every set as quick as possible, and rest for the remaining time. Once 4 minutes are full, go for another set. 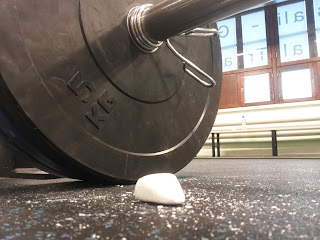 The sled killed me. Deadlifts and box jumps unbroken of course. That was the purpose. Deads were light but it was perfect weight for this one at least today. Box jumps were surprisingly consuming in the end. But that sled… Huh, what a piece of equipment. It was intentionally light, just 55kg plates on top of what the sled weighs itself. I did not respect this one as much as it deserved. It was just pure evilness. My legs recovered on the first break but towards the end they were tired when starting the rounds 3 and 4. This was freaking great workout!