Damned it was a tough day at work. We had the longest seminar ever, and had to sit for almost the entire day, for 8 hours. That doesn't do good to human beings. After foam rolling and mobilizing the body I felt okay to get going with heavier front squats. This has been in the back of my head for 3 days now so it was great to get a chance to go for them. 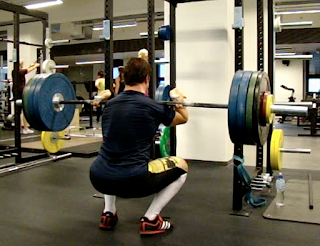 Strength.
Plan was simply to build up, and see how far away I could get today. I reckoned a new record might be available because of all the Smolov squats lately. There were couple of reps at 60 and 80kg, then just singles from 100 kilos on. Those were light up to 120kg. My posture stayed good on these reps and back was in an upright position.

The first heavier one was at 130kg but I felt like that the form looked similar in this one too. Elbows were pointing to the right direction too. Pretty solid lift in my opinion. The next one was my old 1RM at 135kg. I believe I've made that lift 2-3 times in my life but never more than that. There my elbows dropped a little right when I started the ascend from the bottom. That was a tight lift but once I got pass that certain point it was just about standing up. The bottom position, and the turn of direction is the toughest moment.

Before the last rep I did the same thing as when I updated the records on back squat. Piled up 20kg more weight on the bar, stood up with it and counted for 5+ seconds just to feel the weight on my front rack. Psychological game. The descend was slow as hell but at least controlled. That might have eaten up some of the energy but the turnaround back up was alright. In the middle of the ascend my elbows started bailing out and dropping too much. Thus, the lift wasn't as beautiful as I'd like to see but hey, PR is a PR and I'll take it with pleasure!

Pauliina hit this one with me. It's been a lot of fun doing same workouts with my wife. And I got to say she's been kicking some ass big time! Rower was a walking distance away from the pull-up rack / box so I used that for recovery. The main inspiration for this one was pull-ups. And I wanted to get heart rate up so rowing and box jumps were great buddies to accompany pull-ups.


I'm happy that I've been able to put pull-ups in my program consistently without any problems. There's been a good bunch of those already in the past month. Those were unbroken today in each of the 6 rounds. That totaled 72 reps. Rowing was 1:45 pace in the beginning and towards the end it was closer to 1:48 pace. The elements were put to this order so that right after rowing you got to go box jumping and burn your legs. Then upper body gets a little rest so I could knock down the pull-ups unbroken. This was a good workout for sure.