This day was a different one than normally. The purpose was to have that near death experience at the end of the day. Together with Toni we headed to Malminkartano, Helsinki to an outdoor location, which is known for its perfect jogging surroundings and what makes it unique is that it's the highest point in the city of Helsinki, approximately 90 meters above sea level. The view of from the top gives an outstanding 360 degrees panorama view in all directions. It's amazing once you get to the top. We had planned to perform three workouts at the spot with short rest periods. Once the other one performs, the other one does the workout. I think the day was a success. 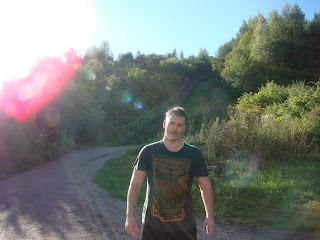 Total of 1.200m run, 60 KB swings and 36 KB clean & jerk. Kettlebell was 20kg in all movements. Run was a shuttle run. We measured a 100m distance, which we went back and forth as long as it was needed, i.e for the first round there were 6 x 100m sprints. This wod was kind of an awkward as the feeling got better towards the end of the workout. That's because the sprints went shorter. Swings with this 20kg kb aren't that bad for me, they haven't gassed me in any of the workouts that I have performed by far. The clean & jerk movement was somehow tougher with the left hand. It was clear for both of us that our right hands were stronger and some extra work was needed from legs / hips when jerking the kb with left hand. I considered this workout a good start for the day. 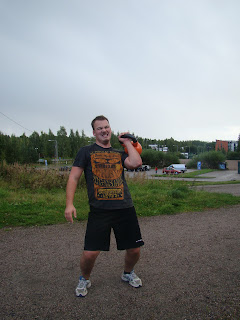 All sets went unbroken, total time was 8.44. It's hard to estimate how hard I ran, it felt that there was some heavy breathing so I don't know how much could have been improved. I had that slight thought in my head that if I run with the best I have, it's going to prevent me doing my best in the following 2 wods so I feel I saved some energy in running due to that. Toni said in some video that he thought the most difficult thing was the kb swings. He figured the same that his right hand was clearly stronger. Afterwards we realised it was all about how the left hand was positioned, it wasn't pointed out the correct way, especially as fatigue was crawling in. Toni went swings in 5-10 sets at the latter half of the workout, until that he went unbroken. To my eyes it seemed that he had the power to go unbroken with the clean & jerks as well but he had some short rest periods in between.

Tough one! There were a total of six rounds, 6 x 100m shuttle run and always in between there were some work to be done: squats, double unders (Toni went single unders but doubled the amount), lunges, burpees, double unders and squats. A lot of work for legs. Once I was finished, so were my legs... I tried to keep up a good running speed as the distance wasn't that long. I have no idea how fast or slow I kept sprinting. The amount of work to be done was quite perfect. Squats went good, lunges too, I managed the 25 burpees well. Because there was a tough pressure on cardio, my concentration wasn't the best in double unders, which caused me stumble a little bit too much. First 10 went good both times but then it was something on 5-10 on average per attempt. When I'm not burdened with fatigue, I can go 20-30 DUs in a row. So having that into consideration, jump rope took too much time. 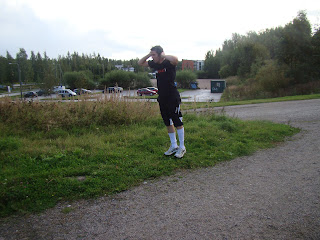 Toni went unbroken most of the movements except single unders. The reason why he went slower on the other movements, is that he does them with little more consideration; short pause before moving forward, it just takes a bit more time with each rep. I figure it's all about more reps, more reps and more reps. Once you do more squats for example, you find out a technique that is most suitable for you, how to get a rhytm that suits you and how can you utilise your hand swings in that. Or for burpees, it's very much a skill related movement in which I have a lot to do still. Toni fought through the workout bravely! 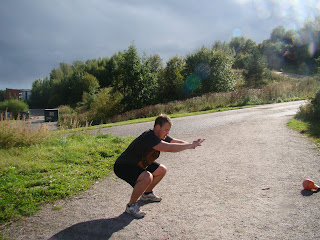 Huh, looking at the stairs from the bottom of 426 steps, the feeling is that it's a never ending path. I went up and down the first round in 4 minutes and more. At the second round my calves began to get the cramping feelings but still I figured this is all about psychology, how well can a man keep his head together and force his body to go further. "Just because your muscles start to hurt, it doesn't mean you have to quit", I remember reading from somewhere. It also gave me some boost as Toni shouted to me all the time. At the end of the workout he said there was an american basketball coach training four of his guys running up and down the same stairs. He said the guys were finalised after few minutes of running. Their coach referred to me running, that "hey guys, c'mon, that guy is doing a 10 minute amrap so shut up and go!" Haha, felt good! Total of two rounds up & down, and 234 steps up on the third round. 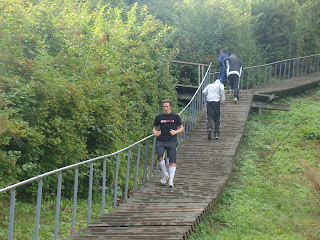 Once Toni was about to go his uphill stair run, all of a sudden the sky stormed and a hail occurred from nowhere. There was some sort of a Rocky - atmosphere as everyone else started running to shelters to avoid the rain and Toni was all pumped up to start his final workout of the day! Only "Eye of the tiger" was missing =) He went a total of 1.208 steps, one round up and down, then 356 to the second round, missing only 70 steps from finalising two ascents.

The conclusion of the day. Awesome!!! Three wods in a day with short rest periods was exactly what we craved for. The burden for the legs was extensive, and there was a lot of running outdoors which we haven't been doing much lately. The focus has been in strength training with wods including at the gym. The cardio type of training has been substituted pretty much to rowing and workouts that give pressure to our hearts. But one must not forget old school running, short and medium distances. We were very satisfied to the workouts and the pain given to our bodies. I am happy to my performance, only double under stumbling at some points was frustrating, other than that, the workouts went smoothly and everything went unbroken. I felt strong today. You'll find more videos from the day at youtube.com, then go for the channel "tommilamppu".

Toni, throw in your comments of the day, should we have another similar session in the future as well?