Went to the gym with my babe without an exact and proper plan. Had in mind to do what I turned out to do but my guts were saying that listen to your body. To say the truth it's been a tough month, I've never lifted this much weight and guess that's the reason why my body feels a little tired at times. Considering the amount of kilos lifted, I feel super though! :) So I ended up doing push jerks emom-style and then 20min amrap of Cindy. 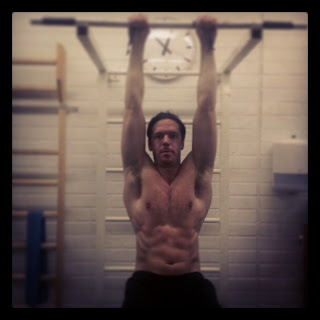 I was thinking about doing only bodyweight stuff but once I laid my eyes on the barbell, I couldn't back away, it was simply too tempting to garb it and start moving. Did some warm-up movements with lighter weights and then hit 70kg on the bar and tapped the clock on. Every minute complete 3 push jerks @ 70kg. On the first 3-4 rounds I did push presses and then progressed to push jerks. The bar has become significantly lighter on the shoulder-to-overhead movements during this summer, significantly! In the spring time this weight would have sounded too heavy for me so it's awesome to witness some progression here.

Plus I was able to do all sets with the bar moving constantly. That means to say I didn't have to stop the bar at my chest after any of the jerks. I completed 3 reps in a row with dropping the bar and bouncing it right back up. That definitely made good things to my confidence. Had no problems lifting the bar up.

I've been thinking about this lady for the entire year. For some unknown reason I haven't performed it though. Only once in the early steps of my crossfit "career" sometime last summer. That time my result was a little short of 20 rounds but I bet my squats were not done to parallel level. There's a big difference in doing them correctly or half way. I was afraid of how well I could match the result from last year, it was 19 full rounds + 5 pull-ups + 5 push-ups, totaling 580 reps. Today without "no-reps" my result was 22 rounds + 5 pull-ups, totaling 665 reps, that's 85 more than last time. Got to be proud about that!

The result equals to 115 pull-ups, 220 push-ups and 330 squats. The catch in Cindy for me is absolutely the push-ups. I was able to go through pull-ups and squats unbroken every round. On the push-ups I went in sets of 10 reps less than 10 rounds, probably somewhere around 7-8 rounds. From then on until the last set I did 6+4 reps, just kneeling a bit and loosening the tension in chest and triceps, then continuing again.

Cindy was tough. I had a lot of mixed emotions during the workout. In the beginning it didn't feel difficult at all. After a couple of rounds it got tougher and tougher. In the middle of the workout there was merely desperation in the air and I was only hoping the time to run fast so it would be over sooner. After grinding through a couple of rounds I realized I'm gonna reach a decent result in the 20min cap. The last rounds included a lot of breathing, a lot of sweating and a lot of mental game to keep on moving.

I kept record of my lap times. I stayed between 40-50 seconds for the first 10 rounds, then the following rounds 10-15 were between 50-60 seconds, slowing a bit every round, and then for the remaining 7 rounds (16-22) I was able to maintain a solid 61-62sec round time. I believe there was a lot of determination involved as I was able to stick to the same time frame each round even though my time had been getting a little longer every minute for the first 15 rounds. Had I not been able to pace up, my result would have been a little shy of 22rds.


Toni went to his Box in the morning. At least he did his first ever pistol squat, awesome! Plus 12 kipping pull-ups in a row, that's spectacular considering his earlier PR was 5 reps. How is that possible man?!? Furthermore, he finished 3 x 50 reps unbroken double unders. I believe his earlier max was 50 reps and today he did it 3 times. That's a good training day!